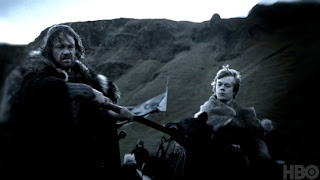 HBO will be airing some new Game of Thrones material tonight (in the USA). Just before the Season 3 finale of True Blood airs, there will be a 20-minute preview of HBO's new and returning shows over the next few months. As well as footage of Boardwalk Empire (Martin Scorsese's 1920s prohibition gangster drama) and the next season of Curb Your Enthusiasm, there will be both behind-the-scenes and some new filmed material for Game of Thrones. This will be the first material to air that will definitely be in the series (the previous teaser was made up of material from the initial pilot that will now mostly not be used).

For those not in the USA, HBO have promised to put the footage on their GoT sub-site ASAP after it airs. I also imagine it will be available on YouTube soon afterwards.

Game of Thrones is currently filming its first season in Northern Ireland and Malta. It is currently tentatively scheduled to begin airing in Spring 2011, possibly March.
Posted by Adam Whitehead at 18:04