Following the hedonistic reign of terror of the redoubtable Maryann, the residents of Bon Temps are once again trying to pull their lives back together. For Sookie Stackhouse, events are complicated by the disappearance of her vampire lover Bill Compton, the emergence of a bunch of werewolves on the scene and the machinations of the vampire King of Mississippi. Meanwhile, Sookie's brother Jason pursues a new career in law-enforcement, Sam Merlott tracks down his real parents and Jessica, now broken up with Hoyt, embraces her vampire side more freely. Meanwhile (again), Lafayette gets a boyfriend called Jesus (True Blood? Controversial? Never!) and there are some meth-dealing hicks around causing mischief. And there's this werewolf called Alcide who fancies Sookie and spends a fair bit of time with his shirt off. And Tara gets emotionally abused (yet again) by Thomas Cromwell from The Tudors. And a whole ton of other stuff happened which I'm forgetting right now. 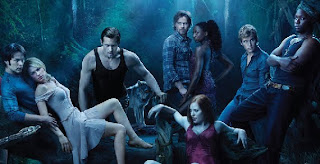 True Blood has always been a nutty, camp, somewhat trashy but always resolutely entertaining show, but its third season is nothing less than a sustained, full-scale assault on the viewer's senses and sanity. Learning from the pacing problems in Season 2 (where the latter part of the season degenerated into a tiresome parade of filler orgy scenes for no discernible plot reason), Alan Ball has massively overcompensated, packing every single instant of this season with surprising plot revelations, new characters, surprise reappearances of old characters (including dead ones), new ideas, new races, new concepts and, indeed, the kitchen sink. It's certainly not a dull season, but it is one that is overloaded to the point of near-incoherence.

If it's possible to pick out a central thread from this anarchic and demented tapestry of pure chaos, it's the attempt by the vampire King of Mississippi, Russell Edgington, to reverse the policy of appeasement by vampires towards humans and have vampires seize control of the world. Edgington is as barmy as a box of frogs on ecstasy (but still a long way from being the craziest character on the show this season) but is extraordinarily entertaining, played with scene-chewing relish by Denis O'Hare. His lover Talbot, played by Theo Alexander, is almost as amusing. This storyline, where Eric and Bill pretend (or do they?) to defect from the Queen of Lousiana's side to Edgington's and political machinations unfold at his stately home, is the definite highlight of the year, despite the presence of a number of extremely cheesy actors playing 'evil' werewolves who are allied to Edgington.

The werewolf storyline otherwise doesn't really go anywhere, despite the pre-season hype touting this as 'the werewolf season'. We do get a promising new regular character in the form of 'good' werewolf Alcide (Joe Manganiello) who manages to remain likable despite inexplicably being attracted to Sookie, who is at her most annoying this year. Hopefully he gets more to do next year.

Other storylines range from the mind-bogglingly inane (the meth-dealing hillbilly plot is almost breathtaking in its utter lack of enjoyability) to the compelling (Jessica and Hoyt continue to have the most believable relationship and best chemistry of any pairing on the show). Tara gets emotionally and physically abused and manipulated again to the point where the viewer is in severe danger of losing the last vestiges of sympathy and respect for the character. This story is somewhat saved by James Frain's completely bonkers performance as mentally unstable vampire Franklin Mott (who makes the King of Mississippi look like a stable and reliable fellow), but the writers need to stop using Tara as their emotional punch-bag, especially since they relent with her cousin Lafayette and give him a reasonably happy storyline, complete with a new love interest (which was great up until the hippy-trippy voodoo vision stuff kicked in).

There's also a series of plot revelations that hark back to the beginning of Season 1 and earlier, particularly retconning the backstories and motivations for Sam and Bill. In the former case this is laughably unbelievable, whilst the latter works better. Whilst Sookie is rather unlikable this year, Stephen Moyer's performance seems to improve once Bill is given more layers and made into a more duplicitous character than we first thought he was.

Overall, this season of True Blood is watchable, but also often headache-inducingly overwrought. The 'Arlene's baby' storyline is unnecessary and tedious, as is the story about Jason's latest romance. The less said about the introduction of the Fae (supernatural beings who apparently dwell within the mystical realm of a Timotei advert) the better. However, we also get a lot more screen-time for Eric and Pam, which is great, and we also get one of the most demented TV cliffhangers of all time:

True Blood's third season (***) is a cataclysmic explosion of sleaze, storylines and characters, some of which are compelling and some of which are barely watchable tedium. Sorting the good from the bad is hard work this year, but the show is never less than watchable, if also frequently achieving far less than its potential. The series will be available in the USA (DVD, Blu-Ray) and in the UK (DVD) in 2011.
Posted by Adam Whitehead at 20:43