A brief new 30-second teaser has aired for Game of Thrones:

In Production
As well as a new production still featuring Emilia Clarke as Daenerys Targaryen: 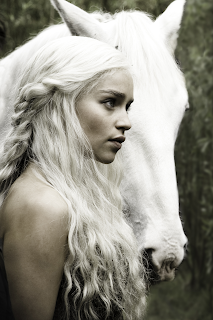 And in addition HBO have set up a new behind-the-scenes blog where production staff will be posting updates on how the series is progressing. Writer-producers D.B. Weiss and David Benioff have already given updates, as has scriptwriter Bryan Cogman. Expect more updates on a regular basis.

Thanks for posting this. It really looks as if it will be very well-made. LRK