The UK's Guardian newspaper has launched a new literary award, namely the Guardian Wankh Award for Smuttiest Book Title. This award, sure to become as hotly-debated as the Bookers, is to reward books whose titles make for hilarious double-entendres or, indeed, just sound a bit rude. The award is named, of course, for Jack Vance's mighty 1969 novel Servant of the Wankh, the title of which has been a source of schoolboy mirth for SFF readers for many decades now, to the point where later editions changed the title to the considerably less smutty Servant of the Wannek.

Many books have been put forward in the comments to the linked article, including the mighty Adventures of Mr. Pink Whistle (Enid Blyton, 1941) and They Do It With Mirrors (Agatha Christie, 1952). The winner was eventually declared to be The Space Willies (Eric Frank Russell, 1958) which is classically juvenile but also a bit dull. For me the front-runner by a clear mile was clearly this masterpiece: 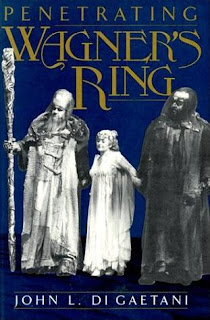 Apparently the book, published in 1991, is a collection of 30 essays delving deeply into the themes, characters and events of Wagner's Ring Cycle. Which sounds fair enough, but in retrospect they should have perhaps given it a slightly more serious title?

Any other suggestions?
Posted by Adam Whitehead at 22:10

I've always found this funny, even at a much older age reading it to my own kids!
[url]http://ecx.images-amazon.com/images/I/41NNengeA7L._SL500_AA300_.jpg[/url]