Whilst travelling through the space/time vortex, the TARDIS becomes trapped in a temporal 'riptide'. With the TARDIS in danger and the Doctor and Amy separated by temporal anomalies, they must attempt to escape from the danger. Unfortunately the TARDIS also has a new threat growing from within... 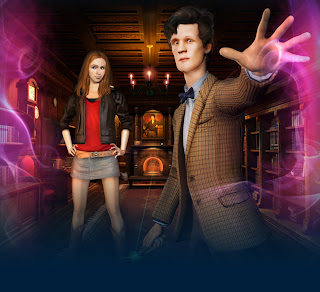 TARDIS is the third of four games in the Doctor Who Adventures series. Like its two predecessors, City of the Daleks and Blood of the Cybermen, TARDIS is a family-friendly adventure game where the player controls the Doctor and Amy in an attempt to resolve a crisis through solving puzzles.

In my earlier reviews, I pointed out that Blood of the Cybermen showed real improvements over City of the Daleks, indicating that the creators had listened to the negative feedback over that game and solved some of the more galling issues. TARDIS, rather cheerfully, reinstates all of the things that made City of the Daleks infuriating and, just for good measure, introduces some new problems as well.

First up is the return of the minigames from hell, with the solution to several puzzles relying on the use of painstakingly tedious maze-games where one single mistake (or, due to dubious collision detection, the whim of the game) resets the whole thing and makes the player begin again. The game shows signs of some intelligence with the use of a Q&A mini-game where the player must use his or her knowledge of Doctor Who (or their ability to alt-tab and have Wikipedia on in the background) to solve a security puzzle, but again they manage to foul it up by making you repeat the entire quiz if you make one mistake, and also by having some rather obscure questions in there that will tax seasoned Doctor Who fans of many decades' standing, let alone young children who've only come aboard with the Matt Smith era.

Outside of the minigames, the game is hamstrung by one rather large problem: its extremely short length. Both of the prior episodes spanned several different locations with multiple characters, dialogue and numerous puzzles to solve, taking about two hours each to complete. TARDIS takes place in exactly two rooms (the TARDIS console room and the Doctor's study) and lasted this player about one hour, about twenty minutes of which were spent threatening the computer with physical violence when yet another minigame maze puzzle reared its ugly head. Even by the standards of the previous titles, this is an extremely short game.

On the plus side, Matt Smith and Karen Gillan continue to do good voice-work and there is some reasonably good dialogue. Old-school Who fans will appreciate the nods to various older stories (mementos of which dot the Doctor's study), and there is confirmation that the Time Lord President played by Timothy Dalton in last year's TV movies was indeed Rassilon, the founder of Time Lord society (how and why he was resurrected is not revealed). However, whatever good-feeling is generated by these fan-pleasing nods evaporates when you reach the end of the game and discover that you have to memorise every single control on the TARDIS console and activate them in a certain order within a tight time limit (fighting the uncooperative camera every step of the way) to finish the game.

TARDIS (*½) has occasional flashes of competence, but overall this is a disappointing, bland and immensely frustrating title that undoes all of the good work of Blood of the Cybermen. The game is available now for free in the UK from the BBC website, whilst a paid-for international version will follow in a few months (however cheap it is, it's probably not worth it). The final game in this first sequence will appear before the end of the year, with a second set of games currently being planned for next year.
Posted by Adam Whitehead at 18:14