The answer to the question is, "No, of course not, that would be too random for words." However, it does transpire that he did inspire the visual look of Chewbacca in the original Star Wars movie through an interesting chain of events. 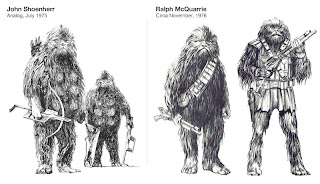 How it works is thusly: in July 1975 Martin's short story 'And Seven Times Never Kill Man!' was published in Analog. Artist John Shoenherr created some artwork for the story which is clearly very Wookie-esque. In itself not entirely damning, until it is revealed that Star Wars conceptual artist Ralph McQuarrie was handed a copy of this very picture by George Lucas (who apparently had claimed it was from the 1930s, not just a few months earlier) in late 1976 as part of his ideas for what Chewbacca would look like. McQuarrie then developed this image into the final look for the Chewbacca character. A rather telling point that the original Shoenherr picture was inspirational is that it has the alien using a weapon that looks very similar to Chewbacca's trademark bowcaster weapon, a detail missing from McQuarrie's rendition, indicating the original was used as a reference by the prop department.

This isn't the first time that GRRM has inadvertently contributed to the creation of an iconic race without realising it. Fellow SF writer Charles Stross 'borrowed' the name 'githyanki' from GRRM's 'Thousand Worlds' SF setting for a race of monsters he was creating for an official Dungeons and Dragons product in the late 1970s. The name and the race caught on, becoming an iconic D&D race still present in the latest iteration of the game. Martin was unaware of this until he was asked about it by a fan during the early 2000s.

Ran at Westeros has hinted that since the ursine alien race in Return of the Jedi who help bring down the Empire was supposed to be the Wookies but was replaced with something cuter and more marketable, we could possibly blame GRRM for the chain of events that led to the creation of the Ewoks (!!!). Although Martin would probably prefer it if we didn't.
Posted by Adam Whitehead at 21:38

Yup. Not unusual in those early days, actually, when the number of people playing the game was far less. Stross wrote an article for White Dwarf magazine introducing the D&D githyanki in 1979, when I assume he would have indeed only been 15.

Cool find, Adam! It is such that imaginative/creative geniuses like Martin, Tolkien, Asimov, etc. (yes, in the same sentence) have been the inspiration for countless threads of fiction, art and cinema.
After reading GRRM's "Fevre Dream" I wondered if the big cuddly one was the first to think up the concept of the synthetic blood substitute for Vamps! Turns out no one has the market for any Vampiric lore as such, but regardless it was an amazingly creative vamp novel. Way better than the current Stackhouse/Twilight drivel.