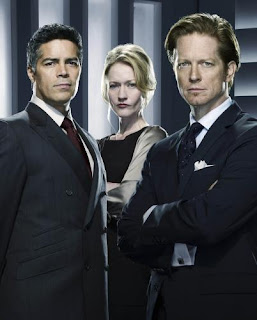 American TV ratings: a more formidable foe than the Cylons.
SyFy were supposed to reach a decision on Caprica's second season last month, but the 15 August deadline passed without comment. Apparently SyFy have extended the cast contract options until November, indicating that they hope to reach a decision before Christmas. This is odd, as it means them making a decision before Season 1.5 begins airing in January 2011. I'd assumed they were going to hold back until after its run was completed to crunch numbers and ratings in a more informed manner, but apparently not. The fanbase has been understandably critical of the decision to hold the second half of the season back a full year. 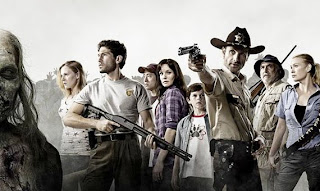 Egg from This Life blowing away zombies? Sold!
Meanwhile, probably the biggest debut TV show of this year will be The Walking Dead, Frank Darabont's take on Robert Kirkman's popular comic series. The series is set to debut in October for a short six-episode run on American cable channel AMC but, impressively, AMC have already renewed the series for a season season of thirteen episodes, which will begin shooting in early 2011.

Update: IGN have updated their story at the link, where AMC representatives state that the series has not been renewed just yet, but are extremely positive about its prospects.
Posted by Adam Whitehead at 15:02

I see Ronald D.Moore has just gone to NBC to start work on some adult urban fantasy series.