Wertzone Classics: Hawkwood and the Kings by Paul Kearney

The continent of Normannia is dominated by the five great Monarchies of God, five kingdoms and myriad duchies and principalities united in the worship of the Word of God as revealed by the holy messenger, Saint Ramusio. But now, five centuries after Ramusio's passing, that union is fracturing. The Merduks of the east have taken the Holy City of Aekir and put it to the sword and the flame. The Kingdom of Torunna stands open to their armies, with only a scant defence being mounted at the fortress of Ormann Dyke. But rather than reinforce Torunna, the Church is instead sending its Knights Militant into the other kingdoms, determined to root out heretics and burn them at the stake. 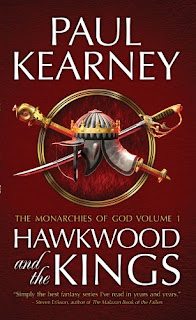 In Hebrion King Abeleyn, determined to reassert the secular rule of kings over that of the Church, sets his will against that of Prelate Himerius, who is determined to continue the burnings of heretics, magic-users and shapeshifters. As part of these intrigues, Abeleyn authorises his cousin Lord Murad to outfit an expedition across the Great Western Ocean in search of a new landmass rumoured to exist there. Captain Richard Hawkwood is commissioned to lead this expedition, but once to sea it becomes clear that someone, or something, is determined to see it fail. For his part, with the Fall of Aekir and the apparent death of the High Pontiff, Himerius is determined to rise to high office and see the entire continent ordered to his design.

As the Merduk armies dash themselves against the walls of Ormann Dyke, a young cavalry officer, Corfe, last survivor of the Aekir garrison, emerges as a canny warleader who may hold the key to saving Torunna and Normannia. For in his party from Aekir is an old man who claims to be the High Pontiff Macrobius, and the revelation of his survival will splinter the continent in two and unleash turmoil and strife the likes of which have not been seen in centuries.

Hawkwood and the Kings is an omnibus edition containing the first two volumes of Paul Kearney's classic Monarchies of God series, Hawkwood's Voyage (1995) and The Heretic Kings (1996). Long out of print, this reissue is a very welcome move from Solaris. If it wasn't for poor sales (despite heavy critical acclaim), this series would be mentioned in the same breath as A Song of Ice and Fire and The Malazan Book of the Fallen as one of the strongest epic fantasy series of the past fifteen years.

Kearney's writing style, which comes across somewhere between Martin, David Gemmell and Bernard Cornwell, is brutal and direct. This is not a pleasant world and all of the characters are flawed individuals developed with complex motivations. Lord Murad, for example, is initially portrayed as an antagonist but by the end of the book he has gained more of the reader's sympathy, whilst our erstwhile heroes Hawkwood and Corfe both have plenty of negative traits (Hawkwood treats his wife badly, whilst Corfe fled Aekir rather than stand and fight). In this sense the series withstands comparison to A Song of Ice and Fire, although the (relatively) slim page count-per-volume means that the series cannot build up the same kind of unstoppable momentum. Still, the complex politics and characterisation will appeal to fans of that work. 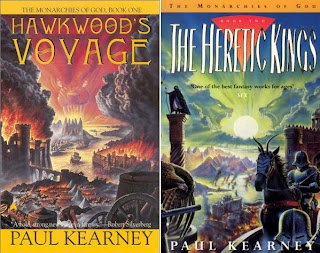 An area which Kearney could have badly fumbled is in his treatment of his source material. The Fall of Aekir is modelled after the Fall of Constantinople in 1453, with the Merduks standing in (fairly obviously from the name) for the Ottoman Turks and hence Muslims. Kearney avoids this by showing the Merduks to have honourable generals and soldiers amongst their ranks even as their leaders are shown to be a mixture of the corrupt and the competent. He could have tipped this in the other direction with the Ramusian Church, a clear stand-in for Christianity, portrayed too villainously, but solves this by adding sympathetic POV characters within the Church's ranks (particularly Albec and Avila), showing the internal dissent and strife that have driven some in the Church to the current extremism.

Kearney handles the politics, characters and religious material deftly and also delivers great battles, whether on land or at sea. More common now, Monarchies was unusual when it was published in being set further up the technological ladder than most epic fantasies, with gunpowder, arquebuses, culverins and mortars being the weapons of choice. Fans of Bernard Cornwell's Sharpe books or C.S. Forrester and Patrick O'Brien will be very happy with Kearney's depiction of combat, the life of a soldier and life at sea. Those readers tired of interminable thousand-page epic fantasy novels will also find Kearney's laser-like story focus and relentless pace refreshing.

Hawkwood and the Kings (*****) is epic fantasy at its very best, combining strongly-realised characters with epic battles, complex politics and a compelling storyline. This new edition will hopefully lead to a resurgence of interest in this over-neglected series. The omnibus is available now in the UK and USA from Solaris Books.
Posted by Adam Whitehead at 12:46

Email ThisBlogThis!Share to TwitterShare to FacebookShare to Pinterest
Labels: hawkwood and the kings, monarchies of god, paul kearney, wertzone classics

Another push to try make Kearney more recognisable. Another quality reivew (although a tad biased) from you Adam. I'm ordering the omnibus as I write this.

I have to confess I've never even heard of this series. Your review and in particular your comparison to Martin, Cornwell, O'Brien and Forrester, some of my favorite authors, has just moved this one to my must read list!

Finally! Ive been waiting for these reissues for years and years. Just ordered it.

Paul is a great writer. I've read the Ten Thousand, and can't wait to dive into these

I got Century of the Soldier today. Now I can finally plunge into reading those books.

great article Wert. I would love to see more Wertzone Classics as it would lead us to more great fantasy series which have the great benefit of being completed series.

Wow, this review made me very interested in reading this... nice review. Thanks :)

I've just ordered these from BookDep on your recommendation - can't possibly go wrong with a WertRec eh?