Gaunt's Ghosts: Only in Death by Dan Abnett

The war in the Sabbat Worlds wages on. The Ghosts have been deployed to Jago with orders to hold the remote mountain fortress of Hinzerhaus against a possible enemy flanking maneuver. Arriving at the massive redoubt, the Ghosts find a vast house hiding ancient secrets and inhabited by some old friends. As the forces of Chaos mount an assault on Hinzerhaus, the Ghosts discover that a far greater threat than the exterior enemy may lurk in the bowels of the fortress. 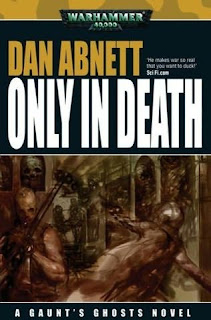 Only in Death brings the 'Lost' arc of the Gaunt's Ghosts series to a conclusion, and the series almost up to date (one further novel, Blood Pact, beginning the 'Victory' arc, has since been published). Abnett's policy in the last few books in the series has been to shake up the format and introduce some weirder and more oddball elements, and this continues in Only in Death. In short, this book overlays a horror narrative over the more familiar scenes of military action, employing both supernatural and psychological elements to really get under the characters' skins.

At the same time Abnett continues his policy of using each book to flesh out characters, bringing new Junior Commissar Ludd and Commissar Hark under the spotlight and dropping Gaunt into the background. The novel's supernatural overtones also allow for some clever moments for character exploration and growth (Larkin hallucinating about the long-dead Bragg and Cuu battling over his soul features some nice call-backs to previous books and explores more of Larkin's post-Gereon personality).

Of course, the action is not neglected, but this time around it's a lot more brutal. Previous novels have seen the Ghosts achieve their objectives with minimal-to-acceptable losses, but Only in Death is nasty, wiping out entire platoons without breaking stride. The end of the novel is ambiguous, with the Ghosts surviving (probably not too devastating a spoiler) but badly broken and bloodied. How they recover from this devastating battle remains to be seen, and will hopefully be explored further in the succeeding 'Victory' arc.

Unfortunately, the book does suffer a little from cheesiness (this series, being military SF set in an ongoing franchise, does occasionally bump into the cheese but generally does a good job of steering around it) as two Ghosts go off on a badass solo mission where they eliminate vast swathes of the enemy single-handed. Abnett sells it as well as he can, but it's somewhat corny, especially when you realise he has retreated from the tantalising possibility of doing something truly shocking in the series.

That said, the novel's ending repairs some of the damage as we get a well-foreshadowed explanation for the weirdness (well, some of it, anyway) and a scene which is genuinely powerful, bringing the novel, the arc and the Lost omnibus to a fine conclusion.

Only in Death (****) is a dark, bloody, weird and satisfying entry to the series, despite the tonally dubious 'two soldiers against the world' subplot in its latter part. The novel is available now as part of The Lost omnibus in the UK and USA.
Posted by Adam Whitehead at 18:35