On his blog R. Scott Bakker has given an update on his current and future projects. 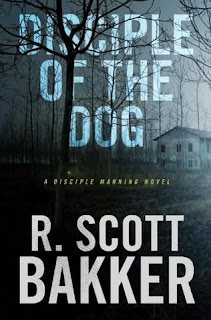 Disciple of the Dog, the first in a recurring series featuring the character of Disciple Manning, is now out in Canada with US publication to follow in November, whilst the UK edition will be published next week. Bakker expresses surprise at the lack of reviews so far, which is unsurprising as review copies have apparently not been sent out for the book. Bakker describes the book as his most accessible to date with his biggest popular break-out potential. He also reports he has the next two books in the series planned.

Back with the Second Apocalypse series, Bakker has completed the revisions and editing for The White-Luck Warrior, which should hold firm for a March 2011 release. He is also 20,000 words into the next book, The Unholy Consult, which he hopes he can complete in time for an early 2012 release.
Posted by Adam Whitehead at 11:31

Email ThisBlogThis!Share to TwitterShare to FacebookShare to Pinterest
Labels: disciple of the dog, news, r. scott bakker, the aspect-emperor, the white luck warrior

Apparently DotD is supposed to have greater mass appeal.

I'm going to reading it for a number of reasons, and to find out what Bakker considers "appealing to the masses" is definitely one of them.*

* Particularly since before this post on his blog, he made one saying that DotD would be more fuel for the people accusing him of sexism. I hate the fact that he's become so defensive about it - would it kill him to throw some "quota characterization" in there, so as to appeal to more readers?

I just received this in the post yesterday, looking forward to getting into it. (Though mine's by "Scott Bakker", not "R. Scott Bakker" ;))

I wonder what the significance is of his (non-Second Apocolypse) main characters having names with religious connotations (Bible, Disciple). Meh, probably nothing.

I wish him luck breaking out into the mainstream but I imagine he's too polarising. Hopefully nothing will get in the way of finishing his fantasy books in a timely manner :)