Gereon, a Chaos-held planet in the Sabbat Worlds that has been under total enemy occupation for years. The local resistance forces, their hopes for liberation ebbing, are overjoyed when Ibram Gaunt arrives on Gereon, but less so when it is revealed that he only has a dozen troopers with him, and their mission is not liberation, but the assassination of a traitor... 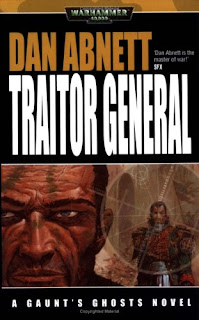 Over the course of the Gaunt's Ghosts series, Dan Abnett has toyed with and tested the limits of what he can do with these books several times, but has generally remained close to the core line that he must deliver a large-scale war story every time out. In Traitor General, the eighth book in the series and the opening of The Lost story arc (which spans four volumes), he goes for a somewhat different approach.

Gaunt and his team are deep undercover and must employ stealth, misdirection and hiding to achieve what they normally would using force. That wouldn't be so much of a problem except that the world they are operating on has been occupied by Chaos for years, with the result that the entire planet is tainted, a taint that starts seeping into Gaunt and his team. This causes increasingly odd behaviour as their perceptions of reality and what is right and wrong begin to change. This also means that the enemy forces on Gereon have some extremely powerful forces to call upon that normally would be not be able to manifest, such as the formidable and extremely weird wirehounds and glyfs, both concepts that feel like they've dropped out of a China Mieville novel. In short, Traitor General is where Abnett gets his weird freak on and pulls it off well.

Of course, Traitor General has its requisite amount of action, including a memorable sequence where the ten Guardsmen (and two Guardswomen) have to face off against five Chaos Space Marines in a swamp village (very long odds indeed), or a running battle between rebels and occupation forces in a town. Abnett also continues his welcome tendency of using each new book to highlight a hitherto under-developed Ghost and bring some development and focus to them. In this book it's Brostin, the team's resident flamethrower-operator and pyromaniac, who gets his turn in the spotlight, though Gaunt's nemesis Rawne also continues to develop away from the thinly-veiled antagonist of earlier books into a more rounded character in his own right.

We also get a deeper look inside the Chaos camp as well. For many of the preceding volumes Chaos has been equated with pure evil and its ranks shown to consist almost solely of crazed cultists and suicidal warriors, though there have been hints here and there of other things going on (particularly with the Blood Pact, the enemy army's elite troops). In this book we get a much better look at how the Archenemy of Mankind operates and discover some amusing parallels to the Crusade's own political machinations and in-fighting. Abnett also starts embracing the more whimsical and surreal nature of Warhammer 40,000 humour, something he'd previously steered clear of (presumably for tonal reasons), and marries it to the more traditional dark humour of the books very well. I'm hoping Humiliti and his unnecessarily pedantic transcribing ways return in future books.

Traitor General (****½) sees Abnett doing something new, weirder and more interesting with the Gaunt's Ghosts series and pulling it off admirably, resulting in one of the very best books in the series so far. The novel is available now as part of The Lost omnibus in the UK and USA.
Posted by Adam Whitehead at 19:36

The next one is also incredibly good.

When you're done, don't forget to check out Double Eagle and Titanicus, both spinoff books set in the Sabbat Worlds liberation crusade and focusing on aerial warfare and Titans, respectively.