A round-up of some recent activity on the Game of Thrones TV series. First up, this image from the promo is apparently a work-in-progress idea from HBO for the series logo. 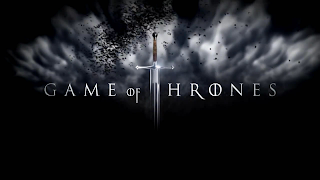 Nice, although the sword forming the 'T' of 'Thrones' is a little bit cheesy. But it's a striking enough image, although I can't help but think that some of the previous fan-made logos and posters were a little bit stronger. 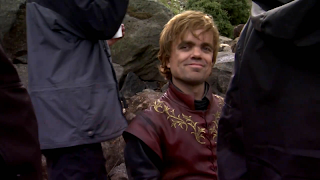 Tyrion is probably the most popular character from the Song of Ice and Fire novels and Dinklage is such a great actor he will do wonders with the role.

The Westeros.org team have also gone through the second teaser trailer, the behind-the-scenes featurette and even the general HBO 'coming soon' trailer to produce a ton of images and in-depth analysis of them, with particular focus on the details of the costumes, sets, armour and their fidelity to the books. Check that out here.

Some interesting tidbits from the last month and a half or so of shooting:

They are filming out of order, with the first month of shooting concentrating on Episodes 3-5, including the Hand's Tourney scene (which had over 200 extras present) and several meetings of the King's small council. Some additional footage set at the Wall, featuring Jon Snow's integration into the Night's Watch, has also been filmed, along with several scenes involving Daenerys Targaryen and her adventures on the eastern continent.

Contrary to earlier reports, which suggested that only Dany's scenes would be filmed in Malta and everything else in Northern Ireland, it appears that there will be a mixture of scenes spread across the two locations. More of Dany's material will be filmed in Northern Ireland (particularly her scenes crossing the Dothraki Sea and in Vaes Dothrak) whilst some of the Maltese locations will stand in for exterior filming of the city of King's Landing.

A great deal of attention is being paid to fine detail. A shot of Grand Maester Pycelle's desk reveals scrolls bearing the names of previous Targaryen kings, whilst King Robert's crown has a stag motif to reflect the Baratheon heraldic symbol. Eddard's small council seat has the symbol of a hand imprinted on it, whilst Petyr 'Littlefinger' Baelish wears a small clasp in the shape of a mockingbird.

Actress Tricia Helfer (Six from Battlestar Galactica), meanwhile, has revealed that she auditioned for the role of Cersei in the series. Although she failed to get the role, she did become hooked on the books and is now a big fan. Maybe they could get her back for another role late on? Melisandre immediately comes to mind.

GoT writer and associate producer Bryan Cogman has been doing some behind-the-scenes blogging about the show, and has released a flurry of post-dated entries covering filming so far. There's some great tidbits in there (such as the fact that the massive, horse-like gates to Vaes Dothrak described in the books will be present and correct on TV). You can find those on the official GoT production blog.
Posted by Adam Whitehead at 23:27

She'd have made a great Cersei though.

"Tyrion is probably the most popular character from the Song of Ice and Fire novels and Dinklage was born to play him."

Was that a deliberate joke or just an unfortunate turn of phrase? I feel pretty terrible for laughing now...

Rereading that, I see it doesn't scan as flatteringly as I meant it. I rewrote the line so it's a bit more positive. I meant that Dinklage is such an excellent actor (especially in the likes of THE STATION AGENT and that film with Steve Buscemi) he will make the role, which is very rich in comedy, drama and tragedy, his own.