The Heroes by Joe Abercrombie

In the heart of the North, two great armies are converging on a small valley to hit one another with bits of sharpened metal. The war chiefs and carls under Black Dow prepare to face the might of the Union under Marshal Kroy, tens of thousands of men (and a few women too) ready to kill for, well, for reasons that seemed good at the time but now escape them. 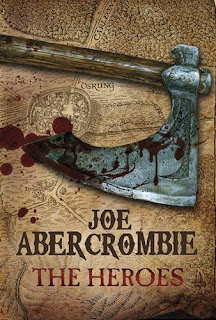 In this war, heroes are needed. Unfortunately, the only heroes around are a bunch of old weathered stones at the top of a hill. Over the course of three blood-drenched days these stones will form the centre of the battle, and the centre of a storm of machinations, conspiracies and hopes for generals, soldiers, murderers and even a crotchety old wizard who has a new invention to test...

The Heroes is the fifth novel by British fantasist Joe Abercrombie, following on from the epic First Law Trilogy and the stand-alone Best Served Cold. The Heroes is another stand-alone, but certainly those who have read the previous books will get a lot more out of it, with minor, almost disposable moments from those earlier books assuming much greater importance here (especially through the successful device of a major POV and a very minor character in Best Served Cold swapping places in The Heroes). Abercrombie seems to be using these stand-alones to set up a new, bigger story further down the road and it will be intriguing to see if this indeed the case.

Back to the present, The Heroes is the first major fantasy release of 2011, and it looks like the new year is already off to a cracking start. The Heroes chronicles a huge battle, one of the largest in history, between the Northmen and the Union, and unfolds in a tight timeline of less than a week (the three days of the battle, plus a few before and a few after). The titular 'Heroes' are a bunch of stones atop a hill in the centre of the battlefield, but there is a lot of wordplay and some interesting commentary on what it means to be a hero, especially given many of the characters' cynicism. Abercrombie has no truck with 'sides' here, and in fact the exact reasons for the war are never entirely spelled out, aside from some hints it might be about territory and others that it might be part of the ongoing cold war between Bayaz and his Gurkish enemies and their respective allies. On both sides there are 'good' (or at least not-as-bad-as-the-rest) guys and bad guys, and the good guys are shown to sometimes do bad things and vice versa (even Black Dow gets a couple of semi-sympathetic moments). 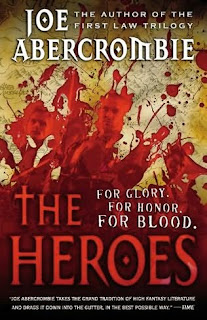 There are several central POV characters. Prince Calder, son of King Bethod whom Black Dow deposed (via Ninefingers) in the trilogy, is a military coward but a born conspirator and strategist (at least in his own mind) who is keen to get his father's throne back. Curnden Craw is a trusted War Chief, a 'straight edge' known for his honesty and his honour, neither of which is doing him much good on the battlefield. Beck is a fresh recruit, the son of a famous Named Man, eager to make his own name on the battlefield. Corporal Tunny is a Union soldier who is the last into the breach and the first into the loot, who has completely perfected the art of making a rout look like a tactical withdrawal. Finree dan Brock, the daughter of Marshal Kroy, is eager to regain her husband's honour and fortune after his father betrayed the Union in war. Finally, Bremer dan Gorst, the former bodyguard of the King disgraced after failing to protect the royal personage during an incident in Styria, is keen for revenge and redemption.

These stories entwine around one another, with other characters popping into the story (Bayaz, First of the Magi, is bemusingly interested in the battle, whilst Caul Shivers and the Dogman have their parts to play) as it unfolds. This is a book less about the over-arching plot, which is somewhat vague and will possibly become clearer in future books, than it is about the characters and the changes they go through as a result of the battle and the politics surrounding it.

So this is a character-focused epic war story, if that isn't a contradiction in terms. The battle and mayhem are depicted with all the blood, swearing, cynicism and involuntary bowel movements we have come to expect from Abercrombie. Despite the author's scepticism over maps, we get a nice series of illustrations depicting the battlefield as it changes from day to day, which helps visualise the various locations and their relationships to one another. The worldbuilding also steps up a notch, with a sense of time passing (it's nearly a decade since the start of the trilogy at this point) and even some technological (and culinary) evolution and innovation. There's also the continued sense of a stormcloud over the horizon as Bayaz and his enemies continue to skirmish with one another, using proxies to fight on their behalf until some future conflagration is unleashed in full force.

Criticisms? Well, Abercrombie is evolving as a writer, developing a more varied prose style with some nice descriptive touches (even if they are being applied to a soldier's first encounter with the horror of field latrines), but he isn't exactly turning into China Mieville here. If you didn't like the previous four books, there's nothing in The Heroes that will change your mind. However, the improvements and the tighter focus may sway those more on the fence about the earlier books. Fans of the earlier books keen for more information about certain characters from earlier volumes may also be disappointed by the lack of overt information given here on their fates (although there is a whisper of an interesting clue of a possibility that is tantalising). Oh, and disappointingly/thankfully (delete as appropriate) Abercrombie has failed to include one of his trademark terrible sex scenes.

The Heroes (*****) is Joe Abercrombie doing what he does best but better than ever before: gritty, violent, morally ambiguous and darkly funny fantasy with a streak of intelligent cynicism. The book will be published on 20 January 2011 in the UK and 7 February 2011 in the USA.
Posted by Adam Whitehead at 21:00

Email ThisBlogThis!Share to TwitterShare to FacebookShare to Pinterest
Labels: joe abercrombie, the heroes

Interesting review, sounds promising, more so if he actually evolved even more in his own style.

Yay thanks for the great review, this is probably the one book I'm looking forward to the most next year. Now I just have to wait until next year...

Damn you all, UK SFF bloggers! The fact that you have time to read and review something before it even shows up in my mailbox is inexcusable! :P

I can't wait to read this.

Abercrombie is the ultimate antidote to the stodgy, pansy-ass 'elves and mages' fantasy bilge. His stuff is raw, brutal and funny as hell.

The fact that Abercrombie isn't turning into China Mieville is only a good thing as far as I'm concerned. And trademark terrible sex scenes? I think you mean trademark realistic! Well, in my house anyway :)

I second Fordy. The last thing we need in fantasy fiction is another stylist. Abercrombie is hands down the most entertaining writer of his generation.

I'm curious if this book is a decent entry-point into Abercrombie's writing... I received it as a gift on my kindle, but i'm wondering if it's necessary (or preferable) to go back and start with the First Law series. Having read the first chapter already, i like what I see, but I guess I'm more hoping that there aren't any major spoilers for the earlier series. Any advice?

It probably works a little better to have read THE FIRST LAW and BEST SERVED COLD beforehand. There's a few little nuances that will make a bit more sense. But mostly, THE HEROES can be read by itself just fine. Hell, read it first, read the other books if you like, then read it again to see what you missed first time around ;)