New Bordeaux, 1968. Lincoln Clay returns from Vietnam and, reluctantly, starts helping out his family and the criminal life he thought he'd left behind. A bank raid, pulled off with the help of the local mob, goes south and Clay is betrayed and left for dead. Surviving, he sets out to destroy the mafia family running the city and take everything over for himself. 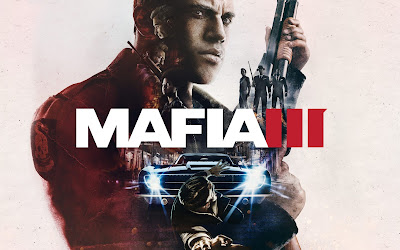 Back in 2002, Illusion Softworks released Mafia (aka The City of Lost Heaven), one of the greatest video games of all time. Mafia had an incredible narrative focus and memorable characters, not to mention jaw-dropping graphics for the time. The game's story - of the rise, fall and escape of taxi cab driver turned mafia hitman turned state's witness Tommy Angelo - didn't break new ground, but the dialogue and voice acting certainly did. The gameplay was also quite good. Mafia achieved its feats through a strong narrative focus: the city was a backdrop with you moving directly from mission to mission. Despite some surface superficial similarities, the game was very much not Grand Theft Auto: 1930, and was all the better for it.

By the time Mafia II rolled around, Illusion Softworks had been taken over by Take 2 Interactive, the publishers of the Grand Theft Auto series, and it's clear that they wanted the team to make the game more like the GTA series, with lots of optional content, side missions and filler activities. Remarkably, the developers held their ground and, whilst Mafia II certainly had some more optional activities, it still wasn't a true open world game. Unfortunately, the game's story and characters were thin compared to the original game and it was much shorter, resulting in a less satisfying game overall (although still perfectly decent to play).

Mafia III, sadly, hoists the surrender flag on the series trying to do its own thing and not be a GTA clone. A new developer, Hanger 13, handles production duties on the game (helped by a few veterans of the first two titles) and it's clear they were told to make an all-out GTA clone...but bizarrely without anything approaching an appropriate budget. The result is a game that is extraordinarily frustrating, giving rise to some excellent gaming moments but then throwing it away with repetitive missions and a startling array of technical errors and crashes.

The game's opening is a near-unmitigated disaster. The opening few hours of the game introduce protagonist Lincoln Clay and depict him carrying out a bank raid which goes horribly wrong and leaves him betrayed and left for dead. Rather than simply tell this story, the game jumps backwards and forwards in time several times for no discernible reason, drops a ton of cut scenes into the mix and also brings in a framing device of a TV documentary in contemporary times looking back at these events. As a storytelling device this is perfectly fine (and gets a lot better later on), but the way it's presented at the start of the game is totally incoherent. 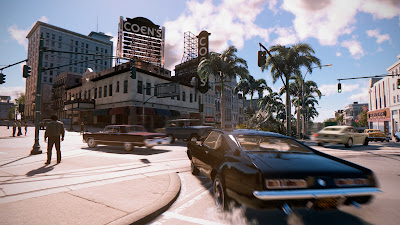 The game doesn't really get going until the city opens up and you're presented with the open world environment. This section of the game is the most interesting, but unfortunately is also the most repetitive. During Lincoln's adventures he allies with three criminals who agree to work with him to bring down the city's mafia family. As he drives the mafia out of each city district, overthrowing their crime bosses and taking over their rackets, he has to choose which ally to assign the district to. Make the wrong choice and your allies will start getting annoyed and will eventually turn on you. However, the game makes it pretty easy to avoid this: there are nine districts, so just give each ally three districts each and they'll be kept sweet forever (simply having a different number of districts that made it impossible to keep everyone sweet may have made the game more interesting).

The act of taking over each district is repetitive in the extreme: a local contact gives you intelligence on the bad guys. Once you've caused enough damage, the crime boss arrives to investigate. Then you kill them. You have to do this twice for each district (to flesh out the capo), so by the end of the game you've done this exact same activity eighteen times (twenty-seven if you count the final "boss fight" against the capo). It starts getting boring somewhere around the fifth.

Fortunately, the game breaks up the territory-control stuff with character-based side missions where you keep your allies on-side by helping them solve their own problems, and helping their lieutenants with activities such as gun-running and stealing trucks full of cannabis. There's also collectables to find (such as records and magazines), although not as many as in other games which means you might be tempted to actually do them, and activities such as street-racing which are actually quite good fun. The game also gives you a lot to do with your money, from customising vehicles to upgrading weapons.

The game also can't be flawed for its voice acting and a lot of its writing, which is very good when the story is actually allowed to move forwards. Set in 1968 and featuring a black protagonist, the game throws itself head-on into an exploration of racism and the civil rights movement, which makes for a sometimes ugly game but also a refreshingly honest one. The characters - particularly Clay and his criminal allies, plus his slightly-comical (but also psychotic) CIA friend Donovan - are really well-drawn. If Mafia III was allowed to focus in on the story, like the first two games, and drop the repetitive open-world stuff it would have been much stronger for it. The open world stuff also damages the game's attempts to be a period piece, by giving you a Satnav (not commonly found in cars in 1968) and a mobile phone (ostensibly a walkie-talkie, but it basically stands in for the mobile phone from the GTA games in most respects). 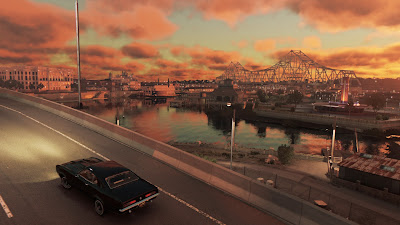 The game is all over the place in other areas. This is a game that came out three years after Grand Theft Auto V but looks like it came out three years earlier. Play this and Mafia II back-to-back and you would not be able to claim with a straight face that six years of video game development took place between them. Particularly awkward are character models: the main characters look really good but everyone else is awful. The environmental graphics are pretty decent, though, and the cars look really nice. The car handling is also pleasingly unrealistic. You can throw these cars around a lot more than the more "realistic" direction that GTA series has gone in and they're fun to drive throughout. On the audio side of things, the game has an excellent 1960s soundtrack, although the number of songs that the game licensed is surprisingly low. It's not long before the same songs and adverts start looping around again and again.

From a technical standpoint, the game is - eighteen months after release - a bit of a mess. I experienced a dozen crashes to desktop in the 33 hours it took me to finish the game, along with frequent screen tearing and clipping. Mission objectives frequently vanished on me, or sometimes took me to the wrong place, and the AI was utterly incoherent, missing me beating someone up in front of a bunch of cops whilst sending the entire city's police department after me for a tiny traffic violation. Pedestrians are also dumber than a box of frogs, often taking the novel decision to power-dive from the pavement into the middle of the street right in front of me for absolutely no reason.

The result of all of this is a bewilderingly inconsistent game, with fun driving and racing sequences, strong story missions and great music and voice-acting sitting alongside myriad bugs, dodgy AI and repetitive side content. Eventually the game gets into a rhythm where it becomes much more fun, helped by some good combat mechanics and - completely unexpectedly - a really strong stealth component. Sneaking into warehouses, and knocking out goons one-by-one before swooping out to deliver the coup de grace on a boss is extraordinarily satisfying.

Mafia III (***½) is a stronger game than Mafia II but not up to the standards of the original. As an open world game it is repetitive and dull, but it comes to life when the story and characters are allowed to breath. The driving, combat and stealth are all pretty decent, and ultimately you can have a lot of fun with the game. But those messy opening hours are a strong hurdle to get over. Mafia III is available now on PC, PS4 (UK, USA) and X-Box One (UK, USA).
Posted by Adam Whitehead at 23:59