35 years ago today, Manchester group New Order released the most important single of their career. "Blue Monday" marked the band's most significant and biggest break with their former incarnation as post-punk legends Joy Division and ensured their future as a separate musical entity. 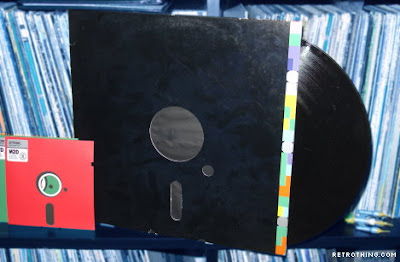 Protip: never release your record in packaging so expensive you lose money on every copy sold, and then make it the biggest-selling record in its format of all time. This is not good financial sense.

New Order guitarist Bernard Sumner, bassist Peter Hook and drummer Stephen Morris had been members of the band Joy Division (formerly Warsaw, formerly the Stiff Kittens) which had achieved significant critical acclaim in the late 1970s, particularly in the Manchester area. Their doom-laden lyrics, pounding bass lines and sparse, powerful guitar sounds won them a significant following and the approval of the music press and important radio DJs like John Peel. Their frontman, lead singer and lyricist Ian Curtis was also praised for his hypnotic stage presence and incomparable vocal style.

Joy Division's rise to the top abruptly and tragically ended on 18 May 1980 when Ian Curtis committed suicide at his home in Macclesfield, on the eve of the band's first scheduled American tour. Both the album Closer and the single "Love Will Tear Us Apart" were released posthumously and were significant critical and commercial successes.

The group reorganised themselves, taking the name New Order from a Guardian article about Cambodia. They recruited Stephen Morris's girlfriend Gillian Gilbert, initially as s second guitarist and then a keyboard player. The band had just started working on a third album, Movement, when Curtis had passed away, so continued work on the record in a similar vein to Joy Division, producing more songs that were dark and heavy on the bass guitar, although also furthering the growing use of synthesisers that had begun towards the end of the Joy Division era. Movement and its attendant singles, "Ceremony", "Procession", "Everything's Gone Green" and "Temptation" (which weren't on the album itself, New Order being contrary buggers at the best of times) were only moderate successes, despite the band's profile and critical acclaim ("Temptation" later found renewed success through an appearance on the film Trainspotting).


The original 1983 12" version of the song played over a (slowed) version of the 1988 music video. Yes, New Order took four years to release a video for their biggest single, which is very them.

The band returned to the studio to record their second album, Power, Corruption and Lies, which was released in 1983 to significantly greater commercial success. But the driver of that success wasn't any song on the album itself, but the single-only release that preceded it.

Released on 7 March 1983, "Blue Monday" wore its influences - Donna Summer meets Kraftwerk - on its sleeve but also fused them into something quite unusual: a disco-synth-funk-rock anthem that would inarguably be New Order's signature song if they didn't have half a dozen others queuing up to dispute that.

Synth pop had been successful in the UK for a couple of years at that point, but "Blue Monday" was influential in how it fused that form to dance music, particularly in how it absorbed influences from the New York club scene (which the band had been sampling between records). Ironically, given its iconic status, the song was originally intended to be a throwaway instrumental the band could leave playing at the end of a set in lieu of doing an encore (which they considered to be pointless, as they'd rather spend that time playing). Sumner and Gilbert laid down keyboards and Morris created a looped beat that could be played on a drum machine. The band considered the result to be far more impressive than they'd first planned. Peter Hook was inspired to write a bass line and Sumner decided to add a lyric.


Bassist Peter Hook on the recording of "Blue Monday" and the album Power, Corruption and Lies.

The song came together pretty quickly in composition, but the actual recording turned out to be a major headache, due to the extremely primitive state of the recording studio which lacked many of the amenities of a modern American or London recording studio: when an awe-struck Kraftwerk visited the studio to see how the band had recorded the song, they walked out in disgust, assuming they were the victims of a practical joke. During the recording Gilbert accidentally missed a note on the synthesiser riff, desynchronising the whole song. The band liked the way it sounded, so didn't fix it and made sure they repeated the "mistake" when playing the song live and in later recordings. It took several hours to record the complex track: upon completion, Stephen Morris stood up and promptly kicked the power cord out of the drum machine, causing it to dump its memory and forcing them to re-record the entire drum loop (not the entire song, fortunately) whilst they remembered how to do it.

Peter Saville, Factory Records' infamously idiosyncratic visual designer, was inspired to create a record sleeve based on the 5.5" floppy disc sleeves lying around the studio. To create the desired effect, the sleeve had to be die-cut three times with a silver inlay. To fit the 12" single (the band refusing to reduce the song's length to fit the more standard 7" single format) this proved inordinately expensive and would cause the label to lose 5p on every copy sold. Tony Wilson, the head of Factory Records, gave the go-ahead, noting that you couldn't put a price on art and, besides, the single was too weird and strange to be commercially successful, so wouldn't lose the company much money.

"Blue Monday" became the biggest-selling 12" single in history and lost the label £50,000 (about £162,000 in today's money), and that was only because they stopped making the expensive sleeves after several printings sold out. It's possible that "Blue Monday" would have sold even more if it had been made clear it was a single-only release; the single re-entered the charts later that year when the album Power, Corruption and Lies was released without the song on it. Some overseas licencees capitalised on the single's success by including it on their versions of the album (due to the song's length, some preferred to issue it only on the cassette version of the album, creating further discographic confusion). In 1988 the song was remixed by Quincy Jones and re-released with a music video, who propelled it up the charts to #3. A further re-released in 1994 also charted.

To date, "Blue Monday" has sold over 3 million copies worldwide, 1.2 million of them in the UK alone. It arguably saved the band - or at least firmly shook them free of their past - and helped propel them to greater success in the following years. It also still sounds like, weirdly, a song from an alternate timeline's far more colourful and interesting future.
Posted by Adam Whitehead at 21:47