The German cover art for Fire and Blood, Volume I has been unveiled. 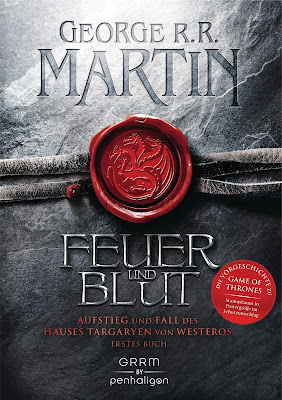 This book is the full and unedited text of the material that George R.R. Martin wrote for The World of Ice and Fire quite a few years ago now; GRRM was only supposed to write a few sidebars but ended up writing over 300,000 words of text for the project in the space of just a couple of months (fake history, it turns out, being far easier to write than prose). Elio Garcia, Jr. and Linda Antonsson had to massively edit down and summarise that material in The World of Ice and Fire itself, but Martin has released three excerpts of that massive block of material as stand-alone novellas: The Princess and the Queen (published in Dangerous Women), The Rogue Prince (published in Rogues) and The Songs of the Dragon (published in The Book of Swords).

This book contains all of that material and much more, telling in some 600 pages the story of the Targaryen dynasty from its days in ancient Valyria before the Doom through to the reign of Aegon III, with the bulk of the material believed to focus on the Conquest and the Dance of Dragons.

The remainder of the Targaryen reign will be covered in Fire and Blood, Volume II, which is as yet unwritten. According to Martin it will not be published until A Song of Ice and Fire itself is completed, presumably because the second volume would have to fully cover both the events surrounding the Dunk and Egg stories and how they end (particularly the Great Fire of Summerhall) and Robert's Rebellion, important revelation about which remain to be made in the novels to come. Of course, it would also be an incomplete history without knowing the ultimate fate of the last scions of the Targaryen dynasty, such as Daenerys.

The German edition of Fire and Blood will be published on 12 November 2018; the UK and US editions appear to be scheduled for October, so I'd expect to be seeing the cover art for those shortly.

Martin recently confirmed he is taking a social media break to focus on finishing the projects on his plate, including The Winds of Winter (the sixth and apparently-penultimate Song of Ice and Fire novel); although previous commentary suggested that he didn't envisage Winter being published before Fire and Blood I, he has also said that he could finish the novel within "months" (back in 2015, but still). Based on the turnaround time of the previous novels in the series, The Winds of Winter should be on shelves around three months after it is completed and handed in.
Posted by Adam Whitehead at 19:56

Email ThisBlogThis!Share to TwitterShare to FacebookShare to Pinterest
Labels: a song of ice and fire, fire and blood, george r.r. martin, news, the winds of winter, the world of ice and fire