Reuters have some interesting number-crunching and analysis of Amazon's foray into TV production, including some information on the upcoming Lord of the Rings TV show. 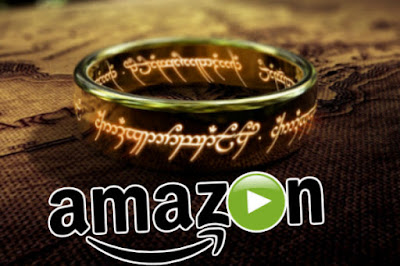 As related previously, Amazon is making a prequel television series, which will be set between the events of The Hobbit and The Lord of the Rings. It is unclear if the TV series will be part of the movie canon, using a similar visual style, costumes etc, or will be a whole new screen adaptation of the series. We do know that, so far, Peter Jackson and his team have not been consulted about the new project at all, although New Line (who produced the original Lord of the Rings movie trilogy) and Warner Brothers (who own New Line) are involved.

According to the Reuters report, Amazon have paid $250 million for the rights (confirming the original reports) and are potentially budgeting £250 million for the first two seasons alone. This means that the set-up costs and the budget for the first two seasons of the Lord of the Rings show will cost more than the entire Peter Jackson movie trilogy, including marketing. Which seems insane. More bananas is that Lord of the Rings is expected to run for five seasons, so the budget for the entire series will be more than twice that amount.

So far, Amazon have not announced a showrunner, any casting or any writers for the new project. Originally it seemed that Amazon wanted the show to air to help combat the expect major launch of the new Disney/Fox streaming service in late 2019, which will be propelled by the first-ever Star Wars live-action show, but that now looks impossible, so LotR will likely not air until 2020 at the earliest.
Posted by Adam Whitehead at 00:43

Email ThisBlogThis!Share to TwitterShare to FacebookShare to Pinterest
Labels: amazon tv, news, the lord of the rings

This might be a mega-hit that defines the TV landscape for the next decade.

...but it also has all the hallmarks of one of those catastrophic decisions that go down in the legends of the movie/TV business to (vainly) warn future visionaries.

This is a colossal amount of mony, and what are they actually buying with it? A TV show with no scripts or key crew or casting. The name "The Lord of the Rings", but none of the plots or characters that people associate with that name - and a proposed setting that seems short on potential (so what, they're doing a five-season film of that bit in the appendices where gandalf catches everyone up on 'yeah, I wandered around a bit, not much happened'?).

They're going to have a massive premiere audience, no matter what happens, thanks to name recognition and curiosity alone. But if the show's not actually very good, I'm not sure that the LotR name - once you've gone out of your way to piss off actual LotR fans, who are not known as a forgiving bunch when it comes to new directions - will be enough to make sure people stick around. And if they don't, this will become the biggest commercial disaster in the history of television.

Maybe that's not the most likely outcome - maybe they're right that people will watch anything tolkien branded, whatever it is. Or maybe they'll actually, somehow, make it good. But I think the disaster outcome is at least a serious risk.


I guess that probably doesn't matter, because it's really just Jeff Bezos paying people to make the TV show he wanted as a kid - when there's an audience of one, the commercial aspect is a bit irrelevent. But if nothing else, if this does go kaboom, it'll deter other networks from taking risks in the genre.