After being in development hell for several years, BBC Studios has greenlit a fresh Discworld TV series. Entitled The Watch, it will focus on the Ankh-Morpork City Watch under the command of Sam Vimes. A six-episode first season has been given the go-ahead. 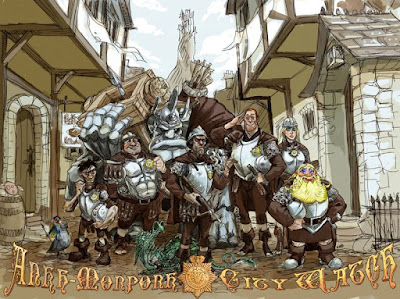 The Watch has been in development at the production company Pratchett founded before his passing, Narrativia. It was previously believed that the show would start off by adapting the novel Guards! Guards!, which introduces Vimes and the Watch, before mixing up original, new adventures and adaptations of the other novels featuring the same cast of characters: Men at Arms, Feet of Clay, Jingo, Jingo, The Fifth Elephant, Night Watch, Thud!, and Snuff.

Rhianna Pratchett, Terry's daughter and a respected writer in her own right (including her recent work on the Tomb Raider relaunch), will work on the show as a producer and possible writer. Simon Allen (The Musketeers) will also be involved as a writer.

BBC Studios is a division of BBC Enterprises which can develop projects both by the BBC itself and outside broadcasters. The deal comes about after a very successful collaboration between Narrativia and the BBC on the Good Omens TV series, written by Neil Gaiman and based on his and Pratchett's novel, which recently wrapped shooting and will air in early 2019.

Sky Television previously produced live-action adaptations of four Discworld novels: Hogfather (2006), The Colour of Magic (2008), The Light Fantastic (2008) and Going Postal (2010). Prior to that, Cosgrove Hall produced animated adaptations of two other books: Wyrd Sisters (1998) and Soul Music (1997).
Posted by Adam Whitehead at 19:04

How are the live-action adaptations? I've only seen bits and pieces of them, and while the production budget levels don't look very high each cast seems excellent.

So, so much trepidation. Something like A Game of Thrones, I was just happy to see it filmed and curious to see how it would work. But the Watch? Please don't mess it up.

Part of the problem, I think, is that in Angua and even more so Carrot, you have really specific characters that will be very difficult to cast - getting someone who can be clever but naive, charismatic but largely passive like Carrot, will be almost impossible.

(Vimes will need a good actor too, but Vimes is a much more conventional role that it's easier to see actors adapting to).


Stonewielder: opinions vary. I only saw the first couple, but didn't like them. Others did.

Weird middle ground too light for fans (why is X missing... etc...) Yet too odd / rushed for none fans.

Stoneweilder: Hogfather really really tries, and is charming for that. They get the characters...oh, do they get the characters...but they lack the budget.
Going Postal is the best combo of budget & cast and knowing the material...Charles Dance as The Patrician is stellar. It has one or two effects issues, like the vampire flying, but it's solid.
The Color of Magic was a horrendous mess with serious miscastings (I'm not saying that idly, David Jansen is excellent but is so much not Rincewind, and Twoflower.....er.....) I gave up after an hour, so I can't vouch for this one.