One hundred years from now, the world is in a terrible state. Super-hurricanes blight the Atlantic, smashing the coast of North America with repeated ferocity. The American south-west has turned into a dustbowl, entire towns and cities abandoned as water supplies dry up. The United States has an immigration problem, but not one crossing the minefield-laden, fortified wall with Mexico. This one is a flood of refugees from the southern and coastal states headed north, to more temperate climes. As the northern states threaten to close their borders, a charismatic politician named Slaymaker emerges with a platform to "reconfigure" America, to reshape the United States in a way it can survive the weather catastrophe. He employs a superbly talented PR executive, a woman repelled by Slaymaker's politics but inspired by his integrity and his genuine desire to confront the problems facing America head-on instead of standing idly by. 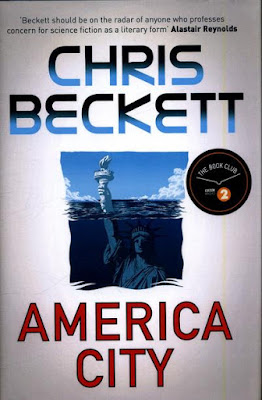 America City is the latest novel by British SF author Chris Beckett. Although still not a household name, Beckett has been establishing himself through a very fine collection of work over the last few years, most notably the accomplished Holy Machine and the Arthur C. Clarke Award-winning Dark Eden, which has also spawned two sequels. The Eden Trilogy was an SF parable set on a planet shrouded in darkness, whilst The Holy Machine was about religion, atheism and what falls between. America City is something else, a story about politics, climate change and what happens when Americans themselves become refugees by the hundreds of thousands and millions.

It's a sweeping novel, packing an entire continent's worth of stories into a breezy 350 pages. It's also a very current novel, taking place in a world where fake news has been weaponised by humanity, aided by AIs so clever they are capable of writing speeches, coming up with jokes and even posing as commentators without detection. It's a book that feels very cynical, as our protagonist Holly moves from being a die-hard delicado (a 22nd Century version of a liberal) to, frustrated by her tribe's predilection for making disapproving noises at the TV but not actually doing anything to make things better, throwing her lot in with the arch-reactionary Slaymaker. Slaymaker's views on everything from climate science (which he still doesn't believe in, even as the American Atlantic coast drowns and the south-west boils) to the death penalty repel Holly, but his insistence on tackling the problem head-on by "reconfiguring" the country (and, later and far more controversially, the continent) makes him stand out from the crowds of talking heads and hand-wringers.

The result is a process by which Holly is seduced, bit by bit, into supporting ever more draconian policies, convincing herself that each more extreme measure is justified if is to save America and its people. Holly's POV chapters alternate with those of her boyfriend Richard, who gets to see the changes in Holly - and the country - from the outside, and has to wonder if she has the right idea. Other POV chapters move between various climate refugees, people fleeing northwards from the floods in Georgia and the encroaching desert in Nevada only to find their fellow Americans turning them away (often at gunpoint), until they have nowhere left to go.

Beckett tackles a lot of topics in this novel, from climate change to politics. The old left-right paradigm mostly collapsed in the 21st Century, but the politics that have replaced it are still dealing with (or causing) familiar problems. There's glimpses of what's going on elsewhere in the world - Africa and Mexico collapsing, Britain turning itself into a fortified island outpost of paranoia and fear, and China annexing the Russian Far East for more living space - but the focus is firmly on the US and what can be done to save it.

It's not a happy or uplifting novel. The book's main message seems to be that human beings are selfish and predictable in their responses: Texans and Californians who once zealously guarded the Mexican border are now forced to cross borders themselves, only to find themselves driven off. But of course when it's them who need help, the situation is different. Politics is still a game won by those with the loudest and best propaganda, not those with genuinely the best ideas (a fascinating background SF idea - the development of carbon dioxide scrubbers large enough to start reversing the effects of climate change - is virtually ignored as it's hard to get voters excited about it).

There are moments of hope: humans are shown to be tenacious and capable of adapting: millions of people are moving north to establish new cities in the Arctic, where they hope the storms and the deserts cannot reach them. They may even be right, but the book ends (messily and inconclusively, like life) before we can find out for sure.

America City (****½) is not for the faint-hearted or those looking to escape the grimness they seen on the news every day. It's also wonderfully well-written, alternates between the grandiose and the subtle, and is unflinchingly honest. It's available now in the UK and USA.
Posted by Adam Whitehead at 20:13