The memberships for TitanCon 2018 are now available. TitanCon is a science fiction and fantasy convention held annually in Belfast, Northern Ireland since 2011 (with two years of informal events before that). This year's event will be held from Friday 24th to Monday 27th August. 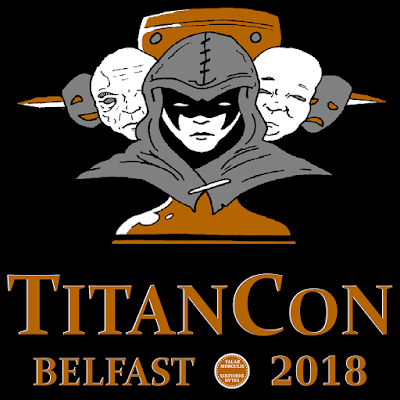 TitanCon began as a Game of Thrones-focused convention, with numerous actors, extras and behind-the-scenes personnel from the show attending as guests. With Game of Thrones wrapping up production, the convention is transitioning to a more general SFF-focused event, with a big emphasis on books. Recent years have seen authors including Joe Abercrombie, Adrian Tchaikovsky, Sarah Pinborough, Pat Cadigan, Peadar O'Guilin, Ian McDonald and Peter F. Hamilton attending, along with local authors from the Irish SFF scene. There's also strong tracks related to artwork, sword-fighting and crafting.

If you're in Ireland or the UK and fancy coming along to a fun weekend with lots of activities and cool guests, I can heartily recommend TitanCon. You'll probably find me mooching around as well.

It's also worth mentioning that TitanCon 2019 will be hosting the annual EuroCon event and will take place one week after WorldCon in Dublin. We've already got quite a few hardcore con-goers from around the world staying on for EuroCon as well, and it should be quite a lot of fun. The details for that event can be found here.
Posted by Adam Whitehead at 21:22

I'm an author and I'd really like for you to read/review some of my books.

At the moment I'm going through review copies from about 2013, so right now I'm not taking on board any more review requests. Cheers.