Shoshone National Park, Wyoming, 1989. A man named Henry takes up a post for the summer in a fire lookout tower in the park. His job is to watch out for wildfires and help visitors to the park. His only contact with the outside world is a walkie talkie which allows him to talk to his boss, Delilah, who is manning another tower five miles away. The two strike up a friendship over the radio. After warning off a couple of teenagers who have been littering and starting fires in dangerous dry tinder areas, Henry finds that odd things start happening, and he can't shake the feeling that something is very wrong in the park. 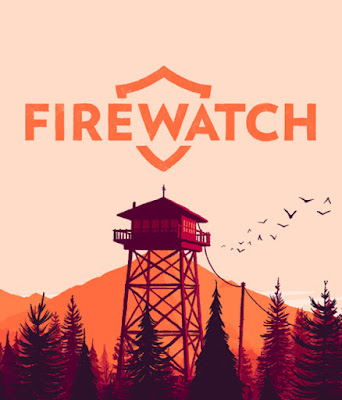 What is Firewatch? Well, it's a game where you watch fires. But it's a bit more than that.

Firewatch is an adventure game, from some of the same writing paragons who achieved the impossible with the first Walking Dead game from Telltale (still, hands-down, the best iteration of that franchise) and created a deeply convincing set of real, flawed and human characters put in difficult situations. You are directed between sets of puzzles - either traditional ones where you have to find your way past an obstacle or narrative ones based on dialogue - with each completed puzzle revealing a little more about the story, the characters and what's going on in this remote rural landscape. It's also been described as a "walking simulator", although that feels a little harsh, as walking simulators generally have very little gameplay in them aside from moving from one area to the next. Firewatch generally has you doing more than that, whether it's searching for rope, spelunking, searching for missing teenagers or outrunning a fire, with a fair lot of choice on what route to take through the game. 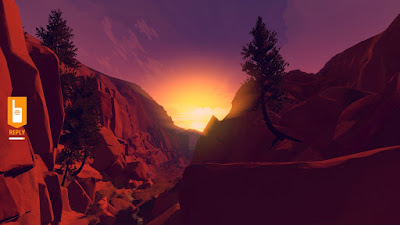 Firewatch is an open-world game. You can explore the park at your leisure at almost any moment in the game, pause to watch the beautiful sunsets and sunrises, stroll along the lake or hike up the mountains. The art design, produced by British artist Olly Moss, is fantastic: stylised and breathtaking at the same time. Just wandering around the game world listening to the exceptional soundtrack is fun. Critics may say there's not necessarily a lot to do in the open world - Far Cry or Fallout this most certainly is not - but it's a rare game that has confidence enough in its atmosphere to let plays chill out and enjoy it.

Firewatch is a character drama. You control Henry and the only person you can talk to is your boss Delilah, who is on the other end of the radio. You don't see or meet Delilah at the start of the game and only learn things from her that she lets you know. Despite this, the two characters form a powerful bond and nod to how people can form relationships without even knowing what the other person looks like. The game also allows you to determine Henry's personality through a clever, heartbreaking opening text section which explains why Henry is in the park in the first place. 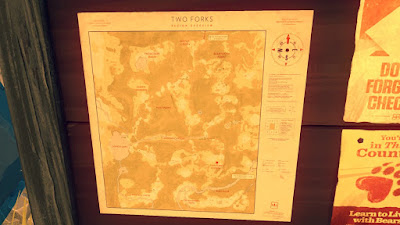 Firewatch is a thematic game. It deals with issues such as heartbreak, loss, loneliness, paranoia, fear, hope and human connectivity. It doesn't over-egg any of these ideas and the game delivers its story and dialogue in a highly naturalistic fashion. The dialogue and voice-acting are some of the most convincing ever seen (or heard) in a game, delivered with conviction. The game's story also unfolds in other ways, through notes, scraps of paper, and books and magazines left lying around, which are stitched together to expand on what's going on (one rather weird side-story is only explained by paying careful attention to some documents you find near the end of the game, and which can be easily overlooked).

Firewatch is also a mystery. Why is there a locked gate where there shouldn't be one? Who keeps lighting campfires in defiance of warning notices? Odd events stack on one another until Henry and Delilah are convinced something weird is going on. But is it, or is it just the isolation of being two days from civilisation in a world with no cellphones and no internet? 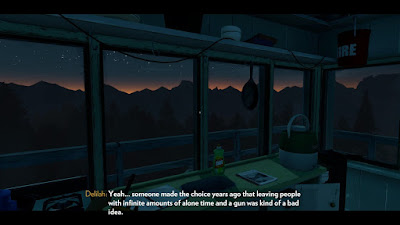 Firewatch is not a perfect game. The concise length (about 5 hours) is to its benefit, as any more would be over-egging the pudding, but some may find that too short. The ending is divisive, but I thought it was excellent and appropriate. The game occasionally becomes a little obtuse with what you have to do next, although only once was I outright stuck (and the solution was almost comically obvious). I did have a repetitive crash issue at the start, but that was solved by downloading the latest patch beta. But the issues are so minor as to be negligible.

Firwatch (*****) is a thought-provoking, smartly-written, beautifully acted game about relationships, the need for them and the desire to escape from them. Like Journey and Brothers: A Tale of Two Sons, it's a game that comfortably works as a piece of art that is also fun and thought-provoking to play. It is available now on PC, PlayStation 4 and X-Box One and is very thoroughly recommended.
Posted by Adam Whitehead at 21:08

This is more a walking simulator than game. It boils down to: this is the next point on the map, orient your way to it. It will trigger the next story point, requiring you to navigate to the next map point, and so on.

The story behind this is indeed good. But if it were a novel, it would mostly be: "And then Jeff found a trail turning left. He checked his map, and turned left, looking for the next right hand turn. He found it and turned right. Then he looked for the item in the vicinity - he didn't know what it was, only that it was close. Jeff found it and got a clue about something happening elsewhere, and decided to walk there. Jeff checked his map and walked straight ahead..."

A game need not be loaded with action to be fun (like the game you liked, Shadow Tactics), but this one is just dull. I could have read the written version in 1 hour with the boring stuff gone and 10x the emotional impact...