The Invasion by Peadar O'Guilin

The island of Ireland has been sealed off from the rest of the world by a mystical barrier. Technology cannot penetrate it. The people of Ireland, the division between north and south no longer mattering, are under constant attack. Every teenager is "Called", summoned to another realm where they do battle with the Aes Sidhe, the ancient rulers of Ireland before they were banished in a great war. The Sidhe have a day in their realm (three minutes in ours) to hunt down and kill the child, otherwise the victime escapes. Sometimes the Sidhe spare the victim, to return them home mutilated or "changed" in some horrific fashion. Most of the time, the Sidhe kill the victim.

Nessa has survived her Call, despite her deformed legs. Refusing to believe she could survive without betraying the Nation, Nessa's government imprisons her and subjects her to torture and interrogation. As Nessa tries to find a way of escaping, the last barriers between Ireland and the Grey Land begin to fail, and the invasion begins in earnest... 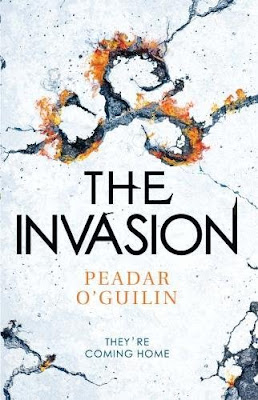 The Call was one of the genre highlights of 2016, a striking mash-up of Koushun Takami's Battle Royale, Terry Pratchett's Lords and Ladies and the TV series Skins, but elevated by O'Guilin's signature dark wit and his sure grasp of Irish mythology. The Invasion (formerly entitled The Cauldron) is the continuation of this story.

Picking up quickly where The Call left off, the concluding part of the tale (this is a duology with the overall title The Grey Land; no trilogies here) follows three separate narratives: Nessa's misadventures in prison as a suspected enemy of the state; Anto as a soldier on the front lines of the invasion itself and Aoife back in the school, helping pick up the pieces in the aftermath of the Sidhe's failed attack. These narratives develop in swift parallel, the relentless pace picking up as each group of characters finds themselves in jeopardy, but also moving towards finding a resolution to the crisis. This results in rapid-fire chapters as we switch between groups (with occasional, brief switches to other characters) and get a more thorough understanding of how the war is proceeding.

The Call was a dark novel, but The Invasion is darker and more gruesome still, despite ostensibly being a YA book. There's also frank discussions of sexuality and a lot of earthy humour. The Invasion gives its young target audience a lot of credit for their maturity and their intelligence.

If there is a complaint, it may be that the book ends a touch abruptly. Things build to a major climax and we get that, with the revelations expanding on what we learned earlier in the novel (or in the preceding one) but the story does feel like it moves from midpoint to endgame in the space of just a chapter or two. Or it might just be that O'Guilin does such a great job of keeping the narrative ticking that it all being over is disappointing. Still, brave to the author for keeping this story constrained and tight rather than expanding things to a trilogy (which, given the first book's success, must have been tempting).

Edit: I had a few people ask about this when the first book came out, so will reiterate it here: the term "Aes Sidhe" is the original Irish term ("Aos Si" is a more recent form) for a mythological species of fairies or elves who originally ruled Ireland before being defeated by men. The Book of Conquests (also The Book of Invasions or The Book of the Taking of Ireland) is an account of this conflict, dating back to the 11th Century but based on considerably older oral traditions.

Needless to say, the term massively predates the term "Aes Sedai", which Robert Jordan borrowed from the Irish for his Wheel of Time sequence beginning in 1990. O'Guilin is simply using the original term from Irish mythology.
Posted by Adam Whitehead at 19:31

Email ThisBlogThis!Share to TwitterShare to FacebookShare to Pinterest
Labels: peadar o guilin, the call, the grey land, the invasion

Oh, god--I never made the Aes Sidhe-Aes Sedai connection. That's based on a pretty awesome mispronunciation, though I guess a common one.