Parks and Recreation: The Complete Series

Pawnee, Indiana. The Parks and Recreation department of the local government is pulled between two forces: the apathetic director, Ron Swanson, a staunch libertarian who is opposed to government spending, and the over-eager, hyper-confident deputy director Leslie Knope, who believes in the positive potential of government to make people's lives better. When local musician Andy Dwyer falls into a big pit on derelict land and breaks his legs, his girlfriend Ann Perkins inspires Leslie to turn the land into a new park...and starts a journey that will take numerous people to destinies they were not expecting. 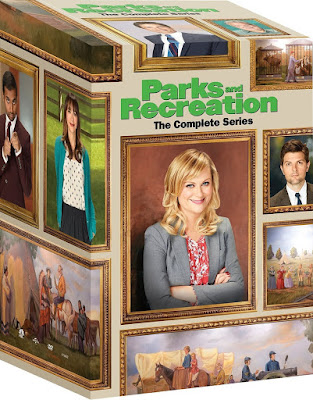 Parks and Recreation is an American sitcom that ran for seven seasons and 125 episodes between 2009 and 2015. It started life as a conceptual spin-off from the American version of The Office, sharing writers and crewmembers with that show and also employing the same mockumentary format, but having its own distinct storyline, characters and theme. It was also conceived as a comedy vehicle for comedienne Amy Poehler (Mean Girls, Blades of Destiny, The Ex). After a rocky start, it became one of the most critically-acclaimed comedies on American television.

The show's first season establishes the fictional town of Pawnee, Indiana and focuses on Leslie (Poehler)'s attempts to turn a local waste ground into a park, only to face the slow, soul-destroying gears of local government, apathy from her boss and opposition from those who want to turn the ground to commercial purposes. The first season is the weakest, mainly because it struggles to find a solid direction for the characters. The writers seem tempted at the start of the show to make Leslie well-meaning but bumbling and incompetent for easy laughs, which is sometimes funny but mostly tedious, and also feels like a retread of The Office. By the time the show moves into its second season, the writers have decided to make Leslie hyper-competent and good at her job, with difficulties and comedy arising from the opposition she faces rather than her own weaknesses. This immediately gives the show much more of an empathetic quality, with the audience rooting for Leslie and sharing her frustration at the increasingly ridiculous problems she has to overcome.

However, the main reason Parks and Recreation works is the fact that the cast and characters are simply excellent. Ron Swanson (Nick Offerman), the show's breakout character, is a libertarian who hates government and believes in self-reliance, but he is also a man of honour whose taciturn exterior belies his affection for his frien...sorry, workplace proximity associates. He gets almost all of the show's best lines. April Ludgate (Aubrey Plaza) is a quiet and self-declared lazy rebel who tries to avoid work and emotion, but gradually over the course of the series becomes a committed, hard-worker with an affinity for animals. Andy Dwyer (Chris Pratt) is a dumb goofball who is also a surprisingly good musician. He also enjoys creating characters such as "Burt Macklin, FBI" and "Johnny Karate", a children's entertainer. Tom Haverford (Aziz Ansari) is a budding mogul who initially falls into a number of get-rich-quick schemes, but in later seasons develops real business acumen and becomes more successful. Ann Perkins (Rashida Jones) is the straight man to Leslie's manic ball of energy, whose bemused reactions to the insanity of Pawnee act as a substitute for the audience. It's worth noting that almost all of these actors have gone on to good things since the show ended (Plaza in Legion, Pratt in the Guardians of the Galaxy franchise and wider Marvel Cinematic Universe, Ansari in Master of None and Jones in Angie Tribeca).


Another way the show succeeds is the way it evolves as it goes along. Each season revolves around a particular challenge, project or obstacle which Leslie has to overcome, helped by her friends. Seasons 3 and 4, arguably the show's high point, sees Leslie having to help bring Pawnee back from the brink of bankruptcy, host a massive Harvest Festival, undertake a clandestine romance with a colleague and then run for the city council. Later seasons see characters leave the department and set up their own businesses or join other organisations, before Season 7 (set three years after the rest of the show) breaks up the gang altogether. Parks and Recreation is a show that enjoys character development and moving people around as they get new jobs and find new interests, contradicting the need of most shows (comedy or otherwise) to create a status quo that works and then milk that for all it's worth. Old characters leave, new ones come in and minor characters rise to major prominence over the course of time. Life can be a bit of a revolving door of experiences and people, and this is something Parks and Recreation celebrates.

Another part of Parks and Recreation's success is the town of Pawnee, Indiana. More than a few critics have said that Parks and Rec is the closest we've ever seen to a live-action version of The Simpsons, not for the core characters or style of humour (which are very different), but for the fact that Pawnee is as insane but impressive a fictional creation as Springfield, Misc. in The Simpsons. As well as the town's geography and businesses, it has a cast of bizarre, minor and regularly recurring characters which gradually accumulate over the course of the seven seasons to such a size that you could populate an actual town with them. These include porn star Brandi Maxxx, reporter Shauna Malwae-Tweep, local fortune heir Bobby Newport, Native American tribal representative-turned casino mogul Ken Hotate ("taking our money back from white people one quarter at a time"), exactingly literal chat show host Perd Hapley and Ron's recurring ex-wife and she-demon from hell, Tammy (Mk. 2). The constant way these characters (and dozens more) flit in and out of the narrative gives the impression of this being a living, real and quite astonishingly dysfunctional town.

There are some negatives. The first season takes a little while to get into gear, and there are a few moments (most notably in Seasons 5 and 6) when it feels like the show has run out ideas and spends a few episodes churning out running gags before hitting on a new direction. The character of Mark - who was set up as a straight man to the insanity of the rest of the cast - feels a bit redundant after Ann took over that role in Season 2 and his departure at the end of that season was a good move. Tom, arguably, doesn't start evolving into a more interesting character than just a selfish jerk until the third season.  But for a show that lasts 125 episodes, it has a remarkably high hit rate.

Parks and Recreation (****½) is a funny, thoughtful and warm-hearted show about friendships, the clash of ideology and reality and how people of different convictions can work together for the common good. Brilliantly cast and frequently hilarious, it shows again that Michael Schur is one of the funniest writers working in American television (having previously worked on the US Office and, subsequent to this episode, worked on Brooklyn Nine-Nine and The Good Place). The complete series is available on DVD (UK, USA) and, in the UK, on Amazon Prime Video (which is the only way to see the show at the moment in HD).
Posted by Adam Whitehead at 14:19

I'd snap this up on blu-ray if it were available. One of the finest TV comedies of the 21st century.