Sad news has broken that science fiction author Kate Wilhelm has passed away earlier this week, at the age of 88. 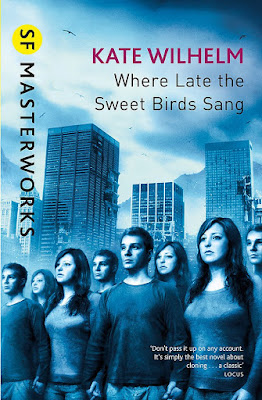 Wilhem was born in 1928 and began publishing work of genre interest in 1956, with the short story "The Pint-Sized Genie". In 1968 she helped found the Clarion Writers' Workshop in Pennsylvania, which remains active and significant today, and edited one of the SF anthologies resulting from the workshop, as well as publishing a retrospective on the process in 2005.

Wilhelm produced a large amount of work, but was happiest when working in the short story and novella format, which attracted widespread acclaim. Wilhelm's work at novel length was less accomplished, with her instead building a career through collections and contributions to anthologies. In 1976, however, she published Where Late the Sweet Birds Sang, an accomplished and classic work of science fiction focusing on a community of clones surviving in a post-apocalyptic Appalachia. The novel won the Hugo Award for Best Novel in 1977, along with the Jupiter and Locus awards for the same year. The Clewiston Test (1977) and Crazy Time (1988) were also very well-received.


Kate Wilhelm in 2012 discussing how she wrote her first short story.

In later years she switched to writing detective fiction, although sometimes with an SF twist. The most successful of these series was her twenty-year Barbara Holloway series, notable for its epic SF-themed conclusion to the story which had mostly been told as a standard detective/courtroom drama.

In 1963 she married Damon Knight, an acclaimed science fiction author and critic; they remained together until his passing in 2002. In 2009 she won a Solstice Award for her contributions to the genre; in 2016 this was renamed to the Kate Wilhelm Solstice Award in her honour.

Condolences to her family. A strong and influential force in science fiction and fantasy, she will be missed.
Posted by Adam Whitehead at 11:30