Patrick Rothfuss has confirmed that his Kingkiller Chronicle trilogy is merely the "prologue" to another story, confusing a lot of people in the process. 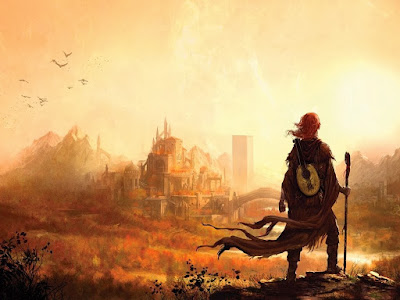 Patrick Rothfuss released the first book in the trilogy, The Name of the Wind, back in 2007 with a lot of pre-publicity about how the trilogy was already complete and also with the intimation that the trilogy was merely the start of a larger story. After all, The Name of the Wind opens with a present-day storyline in which the world is clearly in chaos and darkness, and then the bulk of the trilogy unfolds in flashback and explains how events led to that impasse. Logically, unless Rothfuss was planning to end the series with "and everything sucks now, kthxbai", the story was going to continue in a sequel series which addresses the problems set up in the first few books.

However, Rothfuss has spent the decade or so since then refuting the idea of there being a further series or sequel. As the gaps between books grew longer (the second volume, The Wise Man's Fear, was released in 2011 and the third volume, The Doors of Stone, is still to be published), he has repeatedly played down suggestions that there are more books coming.

Why he broke his silence now is unclear, although there's been some significant news recently. There's both a movie trilogy based directly on the books in the planning stages, with Lin-Manuel Miranda (Hamilton) producing and Sam Raimi (the Spider-Man trilogy, the Evil Dead series) in talks to direct, and a prequel television series focusing on Kvothe's parents in development at Showtime. Rothfuss has also spoken about the book a bit more (after several years of avoiding it), indicating it will be shorter than The Wise Man's Fear and that writing it is uncomfortably like "having sex in public". There is, however, still no indication of when the book will be done.

So now we know what we only thought we knew in 2007. The circle is complete.
Posted by Adam Whitehead at 22:30

Email ThisBlogThis!Share to TwitterShare to FacebookShare to Pinterest
Labels: news, patrick rothfuss, the doors of stone, the kingkiller chronicle

I lost interest in the books some time ago. I don't need another long running Song of Ice and Fire saga. And I just don't care about movies or a TV series either. He has only himself to blame. Ian

See if he can write one more book before he thinks he can do an additional 3 eh?
Worse than waiting for the book is the servile sycophantic fans that think it's some sort of terrible to faux pas to wonder if indeed the writer is writing and could he perhaps concentrate on that if not.

The man is making things up as he goes along. Honestly, there's nothing wrong with that as long as he, cough, complete the series.

As much as I liked the others (despite significant poor stretches in each) at this point I have zero interest in anything he says, does or writes. And he clearly has no clue where to take the story

Having a TV series out before the final book is now not good enough. Now it’s a movie trilogy. Take that George!

He can claim whatever he wants, we will never get theese books. More than 10 years now, and we still havent got the last book that he braged about having already finished in 2007. This guy has zero legitamacy.

Rothfuss is a victim of his own success. For someone that talks about finishing the series before it’s even out and then not publishing the final book for 10 years is a complete sell out. The part that really gets to me is how quiet he is about the writing process on the third book and then turns on the fans when he’s asked about it. In reality he probably hasn’t written anything in years. I loved his first 2 books but his character as a person makes me no longer care about his future work.

Given the current state of things and how long we've waited for book 3, I'm fairly certain either he or I will be dead long before we see a final book in a second trilogy.

I will buy anything Rothfuss will write in the future, not just related to the current trilogy, but my eagerness to put my hands on the next book of the serie has dropped to zero. I find his more and more convoluted justifcations quite distressing to read, probably the movie/tv deal has put him under the kind of pressure he is not yet able to bear.

Patrick is waiting to release his third novel in the KKC to coincide with the release of his new television series so that he can sell more books. Because he's a lazy writer that has fallen in love with his 15 minutes of fame and has become all about the money.

I've completely lost interest in Patrick "purple prose" Rothfuss and his boring novels. You can sum up his two novels with one sentence: "Kvothe goes to the University to learn more about the Chardrian that killed his parents but learns nothing, the end." sadly, that single sentence will save you heaps of time if you are considering reading Patrick's novels. He already lost me as a reader when he began yelling at his fans when they asked about his third novel's release and whining that his life is so hard and writing a struggle. You're a writer, Pat, you chose you write. Writers love writing and you clearly don't so do the world a favor and stop pretending you're anything more than an SJW man-baby and grow up.

Pat is an angry douchebag. He hides behind his charity like a shield while cussing at any of his fans who politely ask him about book 3. There's literally video clips of him saying, "Fuck off" and flipping those people off. And the thing about his charity? It's a secondary charity which means he collects money, takes a 10-20% cut AND THEN he donates what's left to the actual charity. That's like me paying you $20 but instead of just handing it directly to you i instead hand it to an inbetween party who takes $2 then hands you $18. People need to stop kissing Pat's ass like it will ascend them to the top of his fanboy mountain. The guy's a lazy prick and I for one won't ever read anything from him ever again because he doesn't appreciate his fans 0_O