Shadow Moon is released from prison but finds his life is not what he thought it was: his wife has been killed in a car accident, driving with her lover. Strange things are happening across America and at the centre of it is the old man enigmatically known as “Mr. Wednesday.” When Mr. Wednesday offers Shadow a job, Shadow accepts and finds himself drawn into a struggle older and weirder than he can possibly understand. 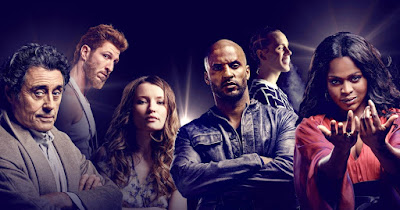 Based on Neil Gaiman’s 2001 novel, American Gods is a lush, eight-part drama which adapts roughly a third of the book. Given the book is only about 500 pages long, this is fairly generous and results in the first season have a relaxed, even languid pace. This is one of the show’s strengths but also its Achilles heel.

There is much to enjoy about this series, including the absolutely fantastic cast. Everyone, from seasoned hands like Ian McShane and Gillian Anderson to relative newcomers, are exceptional. The direction is also unusually striking to behold. Visually, American Gods may be the most gorgeous-looking television show ever made. There’s some stirring and powerfully effective imagery, whilst the colour grading, the framing of the shots, the movie-worthy cinematography and the generous and frequent use of CG to enhance the story are all stunning, as is the clever and imaginative opening title sequence. The show’s use of music, both original and licensed, is remarkable and often inventive (also occasionally bombastic and sometimes drowns out the dialogue, most notably during the major climactic moment of the finale).

The writing and pacing is where the show falters. Many modern shows make the mistake of trying to be relentless and constantly in a rush to get anywhere, often falling short (especially if you’re a Marvel show on Netflix trying to stretch 6 episodes’ worth of actual plot across 13 hours) or achieving that at the expense of character development or atmosphere. American Gods goes the other way, devoting an entire hour to the backstory of one of the major characters, visiting major episodes from their life and establishing their backstory in admirable depth. However, later on it dedicates a second episode to the backstory of that character’s great-great-great-great (etc) grandmother, in a well-written and enjoyable segment which doesn’t seem to add much to the overall storyline. It’s nice that the show can take time out to do this sort of thing, but it saps the show of momentum and energy. Compared to most “binge-worthy” shows, I felt no need to consume American Gods quickly and instead watched it over the course of several weeks. Not every show needs to be a sitting-on-the-edge-of-your-seat or nail-biting thriller, but American Gods goes in the opposite direction and is so laidback that it keeps falling asleep.

The narrative structure is also unsatisfying. Adapting one-third of a novel means that the show has a great opening, but it constantly interrupts the story of Wednesday, Shadow and the other protagonists to pursue tangents (most of them interesting, some consequential, others not) and then peters out at the end. There is a major climactic moment, but it’s more of a pause than a cliffhanger. Fortunately, there will be a second season (probably airing in mid-2019) with a major creative and writing reshuffle that will hopefully address some of these problems.

Still, it’s hard to argue with a show that gives an actor as great as Ian McShane such fantastic material to work with and one that confirms Ricky Whittle as one of the rising stars of television (it’s entertaining as a Brit to see how far he’s come since his days on soap opera Hollyoaks). It’s also great to see Crispin Glover, Pablo Schreiber and Emily Browning on such good form as well.

The first season of American Gods (***½) is lush, beautiful to look at, well-acted and atmospheric. It’s also slow, occasionally so slow as to approach inertness, and lacks tension. This is a fine wine to enjoy slowly and surely rather than a relentless sprint to the finish, and a slightly confusing show which inspires many mixed metaphors. The first season of American Gods is available now on DVD (UK, USA) and Blu-Ray (UK, USA), and is also available on Amazon Prime Video in the UK.
Posted by Adam Whitehead at 16:05