Stephen Hawking, the world's most famous living astrophysicist, has passed away at the age of 76. 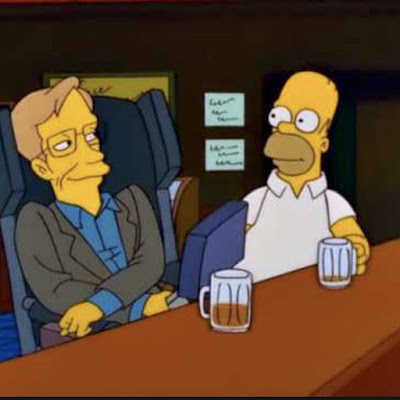 Much has been written in eulogies today about Hawking's immense contributions to the field of physics, most notably his pioneering work on black holes and Hawking radiation, as well as his theories on the Big Bang and "imaginary time". It is perhaps lesser-known that Hawking was also a children's science fiction author, co-penning (with his daughter) a five-volume series about a young boy called George where he explores the universe in an exciting (and educational) manner. This series consists of George's Secret Key to the Universe (2007), George's Cosmic Treasure Hunt (2009), George and the Big Bang (2011), George and the Unbreakable Code (2014) and George and the Blue Moon (2016).


Hawking himself was also a science fiction fan, particularly on television, and appeared several times on various series. The first was Star Trek: The Next Generation in 1993, where he appeared in the Season 6 finale, Descent, as a holodeck character playing poker with Data, Sir Isaac Newton and Albert Einstein. He followed this up with an appearance on The Simpsons (They Saved Lisa's Brain, 1999) and Futurama (Anthology of Interest, 2000). In the latter he is part of a crack squad of geeks charged with guarding the space/time continuum, along with Al Gore, Nichelle Nichols, Deep Blue and Gary Gygax. Hawking would appear several further times on both animated shows, actually recording his dialogue himself (rather than letting them imitate it electronically).


Hawking also appeared several times on The Big Bang Theory and The Fairly OddParents, as well as providing his own voiceover for the biopic The Theory of Everything (Eddie Redmayne portrays him for the bulk of the movie, before he falls ill).

Contrary to some reports today, Hawking never appeared on Red Dwarf, of which he was a massive fan (particularly its episodes featuring black and white holes, and parallel universes). He did contribute to a documentary for the show's 10th anniversary in 1998, however, citing his appreciation for the series.

Of course, Hawking himself was an inspiration for many of today's science fiction novels and films, which namecheck Hawking radiation and use his ideas in how they depict black holes and singularities.

A man of tremendous mental powers who had a wicked sense of humour and was very much a geek, he will be missed.
Posted by Adam Whitehead at 20:07