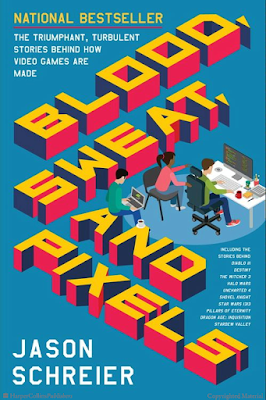 Most people know that the making of video games is a difficult, long-winded and expensive process. But just how long-winded and expensive that task is remains mind-boggling. This book explores some of those stories. A single cancelled contract almost destroyed veteran video game studio Obsidian Entertainment, until they launched a successful Kickstarter for an old-skool RPG called Pillars of Eternity that was a big commercial hit and saved the company. Naughty Dog Studios had already delivered three critically-acclaimed Uncharted games and were a well-oiled machine, but still almost crashed into ruin whilst making the fourth game in the series. Blizzard Entertainment had been a 20-year veteran of game development with almost 100 million games sold but still managed to release Diablo III in a chaotic and divisive state, forcing them to save the game with an expansion pack that revamped a lot of how the game worked. Star Wars: 1313 was a game that looked absolutely amazing and was playing very well when it was abruptly cancelled when Disney took over LucasArts in 2012, flushing several years, tens of millions of dollars and thousands of hours of work down the toilet.

Schreier recounts the story of each game in a well-researched, intelligent manner based on interviews with the people involved and, in some cases, spending time embedded at the studio in question. Arguably the most fascinating chapter is on the development of Stardew Valley, a rare modern game created by just one person (Eric Barone), showing the insane work required to bring what is apparently a very simple game idea to the masses. The most explosive is certainly about the development of Destiny, an online game created by Bungie Studios to escape the treadmill of developing Halo games until the end of time, but that was easier said then done and by the end of development most of those who had been pushing for abandoning Halo had left the company, leaving a lot of anger and bitterness behind (which is an ongoing story, through the problematic release of Destiny's expansion and sequel). The most frustrating story is that of 1313, a genuinely exciting-sounding game that was killed in its infancy.

If there are any negatives to the book, it's probably the lack of depth. The book can only give about 25 pages to each project, and often the chapter ends just as the story gets interesting and we're moving onto the next game. There could also be better context: the Diablo III chapter focuses on the expansion, but we learn nothing about the ten-year development of Diablo III itself and why the game ended up being released in such a chaotic state. The Witcher III chapter also lowballs the game's reportedly hellish crunch period, which led to many people leaving the company (also it also resulted in arguably the greatest video game of the last twenty years). You occasionally feel that Schreier pulls his punches - at least a little - to retain future access to the companies involved.

That said, if you play video games but have no idea how they're made or the workload involved, this book (****) will be revelatory. Well-written, informative and entertaining, it marks a good beginner's guide to the crazy world of making video games. It is available now in the UK and USA.
Posted by Adam Whitehead at 13:12