The crew of the Ghost, now full members of the Rebel Alliance, continue to wreak havoc on the Galactic Empire's forces in the Lothal sector. With the situation critical, the cunning master-strategist Grand Admiral Thrawn arrives to take charge of the situation and soon proves himself to be a formidable opponent to the rebels. 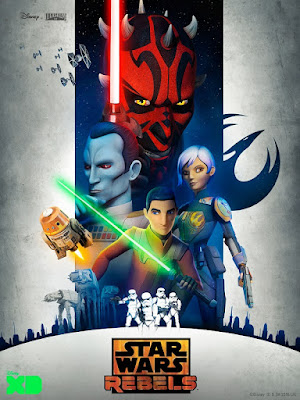 The third season of Star Wars: Rebels continues to darken and deepen the story. The first season featured the rebels getting into knockabout adventures against the Empire; Season 2 was a considerably more complex story about war, betrayal and sacrifice, ending in a bruising confrontation between Darth Vader and his former apprentice Ahsoka Tano. Season 3 goes further down this road, focusing on Ezra as he struggles between his loyalty to Kanan and the Light Side of the Force and the promise of answers to his questions provided by an ancient Sith holocron. Unfortunately, the vengeful Maul is also searching for the holocron, believing it will lead him to the hiding place of his nemesis, Obi-Wan Kenobi.

Season 3 is divided between several storylines: Kanan and Ezra's further explorations of the Force (complicated by their meeting with a follower of the neutral path between light and dark); Maul's search for Obi-Wan; the defence of the rebel base; and Grand Admiral Thrawn's relentless search for the rebels as well as the ongoing occupation of Lothal. There is also a further exploration of the theme of family: Sabine spends part of the season working to win her family's support for a Mandalorian uprising against the Empire and Hera likewise plots to free her homeworld of Ryloth, aided by her father and his supporters. The family of the Ghost is also put through the wringer, split up several times before regrouping.

There's a lot of fanservice this season. Wedge Antilles and Mon Mothma are introduced as recurring character and Saw Gerrera (from The Clone Wars and Rogue One) also returns. But the fan-pleasing cameos are in service to the story and secondary to our main characters. It's good to see that the "Ezra is tempted by the Dark Side" plot is both briefer and less angst-ridden than it could have been, with less musing on whether Ezra could really fall to the Dark Side (as the show's main character, we know he won't) and more on Ezra's character and how he approaches the Force, particularly when contrasted to Maul. 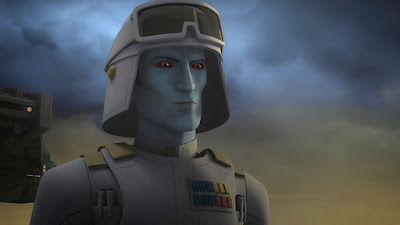 It is good to see the Maul storyline come to an end in a manner that is very appropriate. George Lucas's decision to resurrect Darth Maul on The Clone Wars was questionable in its plausibility but there's no denying that the stories it generated (on both shows) have been pretty interesting, helped by Sam Witwer's inspired vocal performance. Maul's storyline climaxes with the return of an Alec Guinness-era Obi-Wan Kenobi one of the most elegant (and smartest) lightsabre clashes seen in the franchise.

The real talking point of the season, however, is the arrival of Grand Admiral Thrawn in the new Star Wars canon. Thrawn was previously the starring antagonist of the Thrawn Trilogy (Heir to the Empire, Dark Force Rising and The Last Command) which kicked off the entire old Expanded Universe. Well-written by Timothy Zahn, Thrawn's intelligence and lack of insane raving (he was more deeply amoral and ruthless than outright evil) made him a fascinating enemy. Many fans cite him as their favourite Star Wars villain, or indeed character overall. His Rebels incarnation is not quite as Machiavellian as the book version, but he is well-voiced by Lars Mikkelsen (whose brother Mads also appeared in Rogue One) and proves a formidable opponent for our heroes to fight.

Overall, the season tackles multiple storylines on different planets and delving both deep into Star Wars lore and canon as well as developing its own, original creations, all to great effect.

The third season of Star Wars: Rebels (****½) unfolds well and ends with an appropriate epic confrontation between the Empire and the rebels which dovetails into the fourth and final season. The season is available now in the UK (DVD, Blu-Ray) and USA (DVD, Blu-Ray).
Posted by Adam Whitehead at 12:30