Engineer Leo Graf is assigned to an engineering project on a zero-g space habitat. To his surprise, he finds the Cay Habitat is also home to "quaddies", a genetically-engineered human subspecies which has replaced its lower two legs with arms, giving them unmatched versatility in zero gravity, as well as increased resistance to degenerative disorders: they are humans tailor-made to exist in space. When Beta Colony develops a practical artificial gravity technology, it makes the quaddies obsolete overnight...but Graf is not prepared to see them cast onto the scrapheap of history and hatches a daring plan to save them. 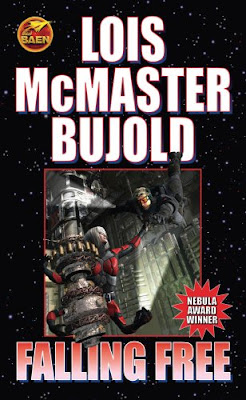 Falling Free is a novel set in the universe of The Vorkosigan Saga but is not part of the core series, instead being set about 200 years earlier and exploring the origin of the quaddies. As is typical for a Bujold SF novel, it is deeply concerned with both hard SF concepts - genetic engineering, Newtonian physics - and how these play out through ethical and character-based dilemmas.

In this regard Falling Free is successful: Bujold is an effective writer and, although this is relatively a minor novel for her, she still tells an interesting story quite well. The SF elements are intriguing, but the ethical dilemma feels clumsy. The legal status of genetically-engineered lifeforms is something you think that the interstellar diaspora would have sorted out by this time, and the over-arcing theme that indentured slavery is a bad thing is hard to argue with. It's also not helped by the fact that the primary antagonist, Bruce Van Atta, is a boo-hiss, moustache-twirling bad guy almost entirely lacking in nuance. Of course we're going to side with plucky engineer Leo Graf and the quaddies.

The story builds up quite well but the narrative is slight: the quaddies are in danger and Leo has to help them escape. And that's really it. The reason for the truncated storyline is revealed in the author's notes. Originally this was going to be the start of a trilogy exploring how the quaddies built up an entire interplanetary civilisation - the Union of Free Habitats - from scratch, but Bujold was side-tracked by the success of the core Vorkosigan books and never got round to writing the other two books. The novel Diplomatic Immunity, in which Miles Vorkosigan himself visits Quaddiespace, revealed the ultimate fate of the quaddie species and eliminated the need to write the other two books. So that's fine, but it does leave Falling Free as a relatively minor entry in the wider Vorkosigan Saga.

Falling Free (***½) is a fun, readable part of The Vorkosigan Saga and has some curiosity value, but it also feels very slight. It is, however, quite short so passes the time very nicely. It is available now as part of the Miles, Mutants and Microbes omnibus, alongside the other quaddie novel, Diplomatic Immunity (UK, USA).
Posted by Adam Whitehead at 18:25