Preview: THE CITY AND THE CITY TV series

I had the great fortune tonight to be able to attend a screening of the first episode of The City and The City, a four-part BBC TV adaptation of China Mieville's 2009 novel of the same time. 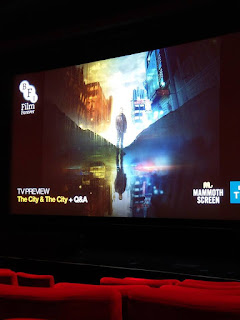 In both the novel and the TV series, the setting is a fictional region of Eastern Europe, abutting the Black Sea, which is the home of two cities: Beszel and Ul Qoma. The two cities are distinct, with different languages, alphabets, styles of dress and architecture. In particular, Beszel is a slightly run-down city in decline whilst Ul Qoma is a somewhat more technologically advanced city of gleaming skyscrapers. However, for reasons that are unclear, the two cities have been fused into the same geographical space. Buildings from one city stand alongside those from the other and some streets are divided right down the middle between the two cities. Citizens of both cities are taught from childhood to "unsee" people, places and things from the other city, to ignore them and not talk to them. If someone has to travel to the other city, they must gain authorisation and cross over at a formal crossing point; even if they only want to travel geographical distance of a few metres. Any violation of this barrier is strictly punished by "Breach", a secret police force with, it is rumoured, supernatural abilities.

The story opens with a murder. Inspector Tyador Borlu is called in to investigate when the body of a young woman is discovered in Beszel. Complications arise when it is discovered that the woman is an American student who had been attending university in Ul Qoma, but no Breach has occurred. The odd nature of the death leads Borlu to cross the border and work alongside his Ul Qoman counterpart to discover what happened, and what bearing it might have on the two cities. 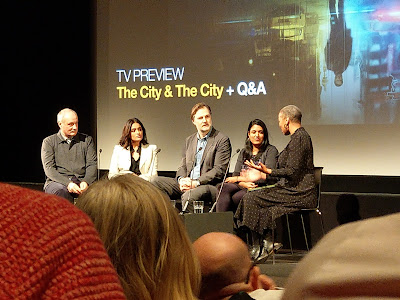 
China Mieville's novel is short but complex, dense and literate. It's also relatively straightforward as a story and practical as a production: adapting, say, Perdido Street Station or The Scar would be far beyond the capabilities of anyone save perhaps Amazon or Netflix. Turning The City and The City into a visual adaptation requires a degree of exposition mostly missing from the novel (where the unusual situation is gradually unveiled over the first chapter or two) and several devices are used in the script to convey the weirdness: Tyador (played by David Morrisey) provides a brief voiceover at the start of the first episode and he occasionally narrates key moments of the action, a surprisingly old-fashioned device which is nevertheless effective. Visual effects also sell the idea: the part of the city Tyador is in is shown in perfect focus, whilst the other city is shown blurred and indistinct, like water on glass, until Tyador makes a conscious effort to "see" the other city, when it snaps briefly into legibility. The two cities are also filmed with different colour gradings, with Beszel tending towards a darker, brownish tint and Ul Qoma towards a lighter, bluer one.

The first ten minutes or so are a bit rough, especially for readers of the novel who may be surprised by how incredibly faithful it is to the novel one moment and how it goes off on its own tangent the next: there are major additions to the cast of characters and story. This makes sense: the episode was longer than the standard hour (I didn't get the exact runtime but it seemed to be around 65-70 minutes) and there are four of them, which means the TV show is in the unusual position of having more time to tell the story than the relatively short novel has (which barely scrapes 300 pages). The new material is, for the most part, well-judged and intelligently deployed. Giving Tyador a wife seemed an unnecessary change, but by having her vanish in a suspected act of Breach immediately personalises the strange situation in the city: rather than the split (and Breach) being remote forces Tyador is aware of, they are instead deeply personal affronts that frustrate him. It gives the premise an immediacy not present in the novel but which works wonderfully on screen. 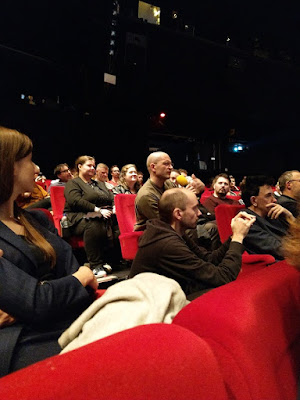 Author China Mieville engaged in exchanges with the cast from the audience, and noted his approval of the project.

Once the initial hump of exposition is surmounted, the story kicks into full gear. The worldbuilding is superb: The City and The City was filmed in the distinctly un-Eastern European cities of Liverpool and Manchester, but some tremendously detailed street signage and wearing of buildings creates the illusion these are remote cities on the edge of reality. All of the street signs in Beszel are presented in English (albeit one with Cyrillic-style accents and ornamentation), with English also the spoken language, but Ul Qoma has its own alphabet and spoken language (both invented specifically for this series). Tower blocks are dirtied up, streets turned into bustling, crowded markets and technology is deliberately rolled back: people use Betamax tapes, listen to audio cassettes, watch CRT TVs, drive old cars and cordless phones have huge aerials like it's 1983. From the glimpses we get (the first episode ends with Tyador deciding he has to visit the other city), Ul Qoma is a far more advanced and modern city.

The actors are superb: David Morrissey is best-known to American audiences from his role playing the Governor in Seasons 3 and 4 of The Walking Dead, but he has an impressive resume in the UK, taking in everything from Doctor Who to Red Riding. He always brings intensity and integrity to everything he does, but in The City and The City he also invokes a rare performance of vulnerability as well. Mandeep Dhillon (Some Girls, 24, Doctor Who) plays Corwi, a police officer assigned to help Tyador, and she brings an earthy realism to the story, helped by an impressive swearing repertoire.

A narrative fan map of Ul Qoma and Beszel.

Email ThisBlogThis!Share to TwitterShare to FacebookShare to Pinterest
Labels: bbc, china mieville, the city and the city