SF&F Questions: Will there ever be a PATHFINDER movie or TV series? 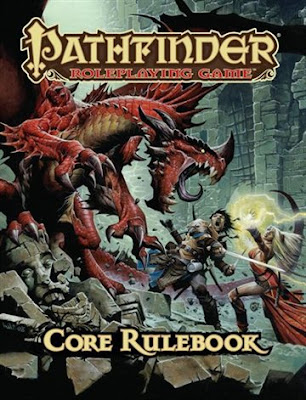 The Basics
Pathfinder is a very popular pen-and-paper roleplaying game published by Paizo Publishing since 2009. It is a spin-off of the 3rd Edition of Dungeons and Dragons; in 2008 Wizards of the Coast released the 4th Edition of D&D, but it was extremely unpopular for deviating heavily from the previous ruleset, which had become the biggest-selling and most popular roleplaying game in history over eight years and two sub-editions. Using the "Open Game Licence" (which allows other companies to develop derivatives of D&D 3rd Edition), Paizo created a game much closer to 3rd Edition in scope and rules. Pathfinder is sometimes called "3.75 Edition" for this reason.

Given the immense popularity of Pathfinder, which has spread from the roleplaying game to novels, comics and audio dramas, many people have asked about the possibility of Pathfinder movie or TV series.

The Popularity of Roleplaying Games
Pen-and-paper roleplaying games are a niche field. Not as niche as they once were, but certainly compared to films, video games, novels and even board games, they are a relatively small medium. The biggest-selling RPG of all time is Dungeons and Dragons. Across six major rule sets and editions (along with numerous variant rules and options) published since 1974, incorporating dozens of campaign settings and hundreds of adventures, the entire D&D RPG catalogue has sold just over 20 million copies. This is undeniably impressive, but it's also very modest compared to say, novels; The Lord of the Rings has sold almost 300 million copies by itself and the Harry Potter series has sold over half a billion copies. It's also modest compared to video games: Skyrim sold 7 million copies on its first day on sale in 2011, with lifetime sales now exceeding 30 million copies (and approaching 50 million of the larger Elder Scrolls series). The Witcher 3: Wild Hunt has sales also closing in on 20 million copies, of a single title in a three-game series.

Of course, D&D is a game where only the Dungeon Master actually needs the rule books and the number of people in a gaming group usually runs from 4 to 6; thus the number of people who have played D&D is far higher than 20 million, but is also impossible to quantify (this extends to all other tabletop RPGs as well, in fact).

Dungeons and Dragons is also an outlier in sales, the only RPG whose new edition rulebooks hit the bestseller lists on a regular basis. It also has unmatched name-recognition among the general public.

On that basis, the sales of Pathfinder are actually quite impressive. It was the biggest-selling P&P RPG in the world between around 2010 and 2014. In 2015 it was pushed back into third place by the arrival of Dungeons and Dragons 5th Edition, which was seen by many as a dramatic return to form, and by Fantasy Flight's Star Wars RPG (whose success was pushed by the new movies). In 2016/17 Pathfinder recovered its sales position by moving back up into 2nd place, helped by the arrival of Starfinder, an SF spin-off.

Lifetime sales of Pathfinder are hard to judge, because in addition to the physical book sales (which certainly run to at least a couple of million), Paizo offers a subscription model which provides significant new content every month in the shape of magazines and web-exclusive material. However, it's certainly far behind D&D and the various Star Wars RPGs (although given the decades of lead-time those products have over Pathfinder, that's not too surprising).

On this basis, although millions of books sold and tens of thousands of regular subscribers paying monthly for new content is nothing to sneeze at, it's still not at the level that would automatically make Hollywood sit up and take notice. 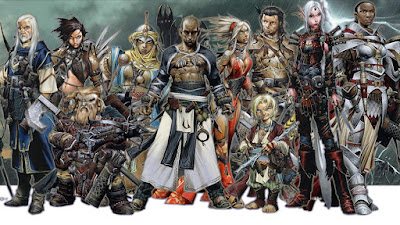 Spin-Off Sales and Visibility
Dungeons and Dragons is extremely well-known for several reasons. First off is its age and influence as the first, original tabletop roleplaying game, which obviously no-one is going to be able to match. Secondly, it engendered a religious scare in the United States in the late 1970s and early 1980s among parents concerned about their kids playing a game with demons, magic and fictional deities in it, to the extent of even inspiring a terrible Tom Hanks movie (Mazes and Monsters). Although the scare was ridiculous and died off after a few years, it did raise the game's profile to the point where the name became commonly known.

Thirdly and most importantly, it has had a significant number of very popular spin-offs. The first of these was the Dungeons and Dragons cartoon series, which ran for three seasons between 1983 and 1985 and was watched by millions of (mostly young) people and still sells impressively on DVD over thirty years later. This was followed up by an incredibly popular novel line which has comfortably sold over 200 million copies. The Dragonlance Saga has sales of over 30 million copies alone, whilst Robert Salvatore has sold over 50 million copies worldwide of his novels starring dark elf ranger Drizzt Do'Urden. Paul Kemp, Troy Denning, James Lowder, Mary Kirchoff, Elaine Cunningham and Ed Greenwood have also sold millions of copies of books apiece. During the late 1980s and early 1990s, each D&D novel published was guaranteed to sell 350,000 copies in its initial print run alone, with Salvatore and Greenwood comfortably doing a lot more than that.

To put this in perspective, R.A. Salvatore by himself has sold more than twice as many copies of his novels as the total number of all D&D RPG materials sold to date.

Sales of the D&D novel line started to tail off in the late 1990s and early 2000s, but new Greenwood and Salvatore novels still sell extremely well.

In terms of video games, D&D has also had an enormous impact. Its "Gold Box" series of 1980s games (such as Curse of the Azure Bonds and Pool of Radiance) sold millions, as did the Eye of the Beholder trilogy in the early 1990s. The Baldur's Gate series has sold around 10 million copies (more with the console spin-offs), with the Neverwinter Nights games not that far behind. Dungeons and Dragons Online, released in 2006, remains active and relatively popular for its age.

The only area D&D has struggled to conquer is film: a live-action movie starring Jeremy Irons released in 2000 bombed and two straight-to-DVD sequels (both made by the producers merely to keep the licence) did not do too well either. A spin-off animated movie based on the Dragonlance setting was also unsuccessful in 2007. Hasbro and Paramount are now developing a new D&D movie for release in 2021 set in the Forgotten Realms world which should do a lot better.

Another tabletop roleplaying game, Shadowrun, has also done well in video games, selling several million copies of two console games released in the 1990s and hundreds of thousands more of an excellent recent trilogy (Shadowrun Returns: Dead Man's Switch, Dragonfall and Hong Kong), as well as rather blatantly "inspiring" the Netflix movie Bright, which has given it a high profile outside the core roleplaying audience.

In stark contrast, Pathfinder has not really done as well in any of these areas. It has a line of novels which has sold decently, but certainly not on D&D's levels. Its attempts to move into video games has been patchy, generating the virtual card-game Pathfinder Adventures from Obsidian Entertainment and the controversial Pathfinder Online, an MMORPG which has struggled to get off the ground despite two successful Kickstarter campaigns. Kingmaker, a single-player-focused CRPG written by the respected Chris Avellone, is also in development with no release date set.

However, Big Finish has released a series of Pathfinder audio dramas and Dynamite have released some comic book series based on the game, both selling reasonably well. Pathfinder has also been used as the rules system in several indie movies from Dead Gentleman Productions and is the game used to fuel the HarmonQuest comedy improv show. So certainly there is scope that the game can translate successfully to other mediums.


So, any chance of a film or TV show?
The chances of a Pathfinder TV show or movie in the near future are both better than they've ever been before, but also still unlikely. If Dungeons and Dragons, the biggest-selling, most well-known tabletop RPG in history with a proven track record for selling novels and video games by the tens of millions, has struggled to get a decent movie made, than a significantly lower-profile game with the reputation (however unfair) of being a D&D spin-off is going to have an even tougher time of it.

That said, fantasy TV is huge at the moment. The Shannara Chronicles was recently cancelled, but Game of Thrones, The Magicians and American Gods have been successful. There are also TV shows in development right now based on The Wheel of Time, The Witcher, Conan the Barbarian, The Lord of the Rings (again) and many other fantasy franchises. These are all based on strong narrative storylines, which Pathfinder doesn't have overall (although individual adventure paths and campaigns, such as Rise of the Runelords, could be adapted). Pathfinder does have a very detailed world and setting, however, which could be used to fuel a new movie or TV series of original storylines. Pathfinder would also come with an enthusiastic pre-built audience who could help pre-sell the project to others.

Answer: a Pathfinder TV show or movie is certainly possible, but highly unlikely until the Dungeons and Dragons movie is a proven success or until Pathfinder develops a big-selling, break-out hit in another area (novels or video games) to help with studio interest. The tabletop RPG audience by itself is too niche to justify such a project at this time.

Thank you for reading The Wertzone. To help me provide better content, please consider contributing to my Patreon page and other funding methods, which will also get you exclusive content weeks before it goes live on my blogs. SF&F Questions and The Cities of Fantasy series are debuting on my Patreon feed and you can read them there one month before being published on the Wertzone.
Posted by Adam Whitehead at 17:35