Why You Should Read...Paul Kearney

Paul Kearney is a Northern Irish science fiction and fantasy writer who may hold the title for "most underread genre author." He published his first book twenty-six years ago and has now written twenty novels, most of them highly critically-acclaimed. Yet his sales remain modest and his profile in the genre is relatively low. 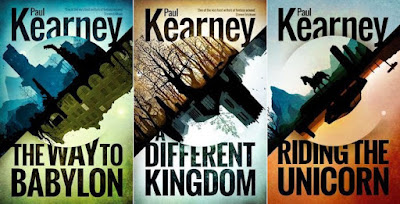 Kearney began his career with three stand-alone novels: The Way to Babylon (1992), A Different Kingdom (1993) and Riding the Unicorn (1994). Each novel was different in tone and feel, although linked by the same thematic device of someone from our world being drawn into a fantasy one. In The Way to Babylon an epic fantasy author is injured and finds himself in his own invented world, where the characters won't let go. In A Different Kingdom - partially an Irish riff on Robert Holdstock's Mythago Wood - a young Irish man is drawn into a mystical alternate world. In Riding the Unicorn, a policeman finds himself in a more traditional epic fantasy world where mighty armies are clashing.

This last book saw a change in Kearney's writing. A keen historical reenactor and fan of secondary world fantasy, he began work on his own epic fantasy series, The Monarchies of God. The series spanned five volumes: Hawkwood's Voyage (1995), The Heretic Kings (1996), The Iron Wars (1999), The Second Empire (2000) and Ships From the West (2002). The books are notable for their Renaissance level of technology (complete with bombards and arquebuses) and their blending of epic fantasy, nautical action, military history and outright horror. They are also unusually short, with none of the books exceeding 400 pages and the last three all being well under 300 pages in length. Kearney would later attribute the disappointing sales of the series - despite heavy critical acclaim and the recommendations of authors such as Steven Erikson and Robert Silverberg - due to the low page count versus those of other epic fantasy series, plus the publisher letting the early books in the series go out of print before the last ones were released (note to publishers: never do this). 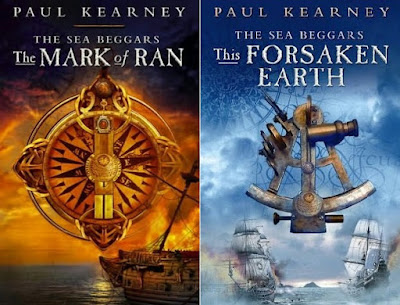 Kearney started work on a new trilogy, The Sea-Beggars, with the focus this time firmly on naval action. Monarchies had originally meant to be primarily focused on the story of Captain Hawkwood and his adventures at sea, but other characters had taken over the narrative and that had dropped back to a subplot. For this series, set in a new world, Kearney was determined that the naval action would remain front and centre. He kept this promise and The Mark of Ran (2004) was a well-received and somewhat successful novel. However, the sequel ran into problems. This Forsaken Earth (2006) was released with little marketing and a last-minute title change (it was known as The Stars We Sail By up until just before release) and sold poorly. The series was dropped by the publisher in the UK, but curiously the US publisher refused to let go of the rights (despite also refusing to publish the third book in the series, Storm of the Dead). The result was a legal logjam that, startlingly, remains ongoing, despite other publishers clamouring to re-release and finish the series

At this point Kearney's career seemed to be cursed: he had received immense critical acclaim for all his novels and had committed fans singing his praises online. He also had strong voices in his favour from the likes of Malazan author Steven Erikson (Kearney provided the introduction to Erikson's novella The Healthy Dead), but his sales were modest and the Sea-Beggars publishing fiasco was every author's worst nightmare, wanting to write a book and being prevented from doing so. 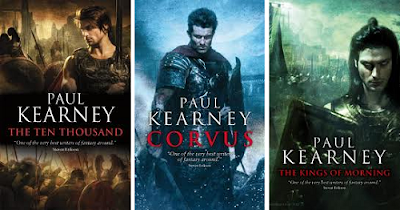 Fortunately, Kearney's fans extended to the editorial team at new imprint Solaris Books. They snapped Kearney up to write a new trilogy for them, an epic fantasy riff on the Anabasis by the Greek writer Xenophon (telling the story of a Greek mercenary army trapped behind enemy lines in the heart of the Persian Empire) and then the story of Alexander the Great. The Macht Trilogy, comprising The Ten Thousand (2008), Corvus (2010) and The Kings of Morning (2012), was a critical hit and also sold quite well. Solaris also reprinted Monarchies of God in two omnibus editions: Hawkwood and the Kings and Century of the Soldier, finally bringing the series to a wider audience (particularly in the United States). 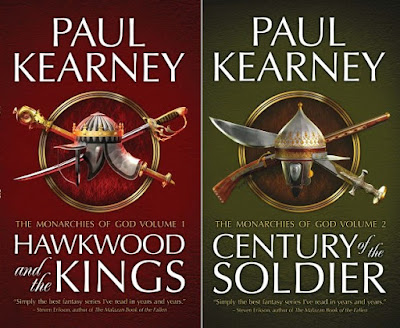 Kearney's alliance with Solaris, at that time owned by the Black Libarary (the publishing wing of Games Workshop), also gave him the opportunity to write in the Warhammer and Warhammer 40,000 universes, a long-standing ambition of his. He started with short stories, penning "Broken Blood" (published in Death & Dishonour, 2010), "The Last Detail (Legends of the Space Marines, 2010) and "The Blind King" (2015) before writing a full-blown novel, Dark Hunters: Umbra Sumus, in 2015. Almost ridiculously, this novel also ran into publication difficulties. The American publishers of Sherrilyn Kenyon's paranormal romance series Dark-Hunters objected to the title, but the problems went beyond a simple title change (the Dark Hunters are a famous Space Marine chapter in WH40K and it was impractical to change their name). The novel is effectively on ice until Games Workshop can work out a solution to the problem. 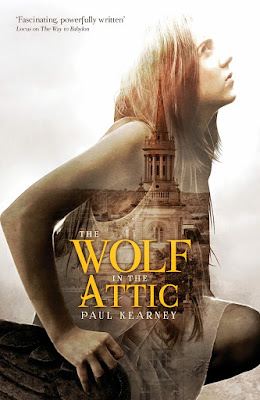 As previously, however, Kearney bounced back strong with a new novel, The Wolf in the Attic (2016). Another major shift in his writing style, this time towards Neil Gaiman-esque modern fairy tales but with his typical grit intact, the book depicts the story of a young Greek refugee living in Oxford during WWII who falls in with a strange crowd (and also meets C.S. Lewis and J.R.R. Tolkien). The novel received blanket critical acclaim when it came out, on both sides of the Atlantic, and sold very well. Proving his versatility, Kearney also finally managed to get a Warhammer 40,000 novel published. In fact, he got a whole trilogy: Calgar's Siege (2017), Calgar's Fury (2017) and Calgar's Reckoning (2018). 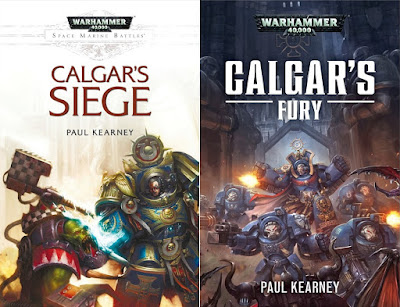 Kearney's next project is a sequel to The Wolf in the Attic, called The Other Side of Things. It is currently scheduled for publication by Solaris in 2019.

Paul Kearney's work is impressive. He writes in concerted, focused bursts where the prose, structure and characters all have exactly the time they need to work, never too much. Kearney does not do filler. He also writes vivid, impressive action scenes but does not glorify violence. His books may feature epic, impressive and exciting battles, but the pointless carnage and waste of life is always exemplified. His musings on heroism and cynicism recall David Gemmell at his best, whilst his sure hand with military action, history and politics are reminiscent of Bernard Cornwell. But Kearney's most formidable ability is how he can spin on a dime and write a mystical (almost magic-realist) fever dream like A Different Kingdom or a modern fable in The Wolf in the Attic. Few modern genre authors can shift prose styles and entire genres with as much ease or confidence, and do so well each time.

Paul Kearney is the best fantasy writer you've never heard of. I urge you to check him out.

Stand-Alone Novels
The Way to Babylon (1992)

The Monarchies of God
Hawkwood's Voyage (1995)

Storm of the Dead (forthcoming, on hold due to legal issues)

The Macht Trilogy
The Ten Thousand (2008)

Thank you for reading The Wertzone. To help me provide better content, please consider contributing to my Patreon page and other funding methods, which will also get you exclusive content weeks before it goes live on my blogs. SF&F Questions and The Cities of Fantasy series are debuting on my Patreon feed and you can read them there one month before being published on the Wertzone.
Posted by Adam Whitehead at 12:01

Email ThisBlogThis!Share to TwitterShare to FacebookShare to Pinterest
Labels: a different kingdom, macht trilogy, monarchies of god, paul kearney, riding the unicorn, the sea-beggars, the wolf in the attic, warhammer 40K, why you should read

Hear hear! I read a lot of Kearney - and that's thanks to you, Wert. I'm grateful.

Also agreed. Is there any chance of the third book in the Sea Beggars being published? I badly want to read them, but hesitate to buy the first two knowing it will be an incomplete story - like Lord of the Rings with Return of the King...

Kearney is my favorite author, hands down. I appreciate the lack of filler in his prose. He doesn't need it, however, as he can do more with 300 words than many authors can with 800. Great action, great characters, and story lines that pack an emotional punch. I hope Mr. Kearney has better luck in the future. He and his work deserve it. The publishers need to get their act together. I would love to be able to finish reading the Sea Beggars trilogy. Thanks for this write-up.

If he is as good as Josiah Bancroft I'm definitely ordering some of his books next payday!

One of my favorites, and of course it's because of you I picked up on him all those years ago in the first place. Thank you!

Okay, you have convinced me...now where should I start? Fan of epic fantasy (WOT, Stormlight, ASOIAF, etc.), historical biographies, and sci-fi.

Hi Adam, Which book / series do you want a new reader like me (who otherwise have read a lot of fantasy) to begin with?

If you're into epic fantasy, definitely either HAWKWOOD AND THE KINGS or THE TEN THOUSAND. If you're more into Gaiman-style modern fables, A DIFFERENT KINGDOM or THE WOLF IN THE ATTIC. For military SF, the WH40K books. For nautical fantasy, THE MARK OF RAN. Or chronologically, THE WAY TO BABYLON.

Thanks. Starting with The Ten Thousand !!