The Galactic Empire is at the height of its power, its reach and control extending across most of the known galaxy. Even the destruction of the Death Star at the Battle of Yavin has not proven a fatal blow. But with the Rebel Alliance gaining new allies and followers, the need for the Imperial military to recruit new pilots for its TIE fighter squadrons has never been greater. 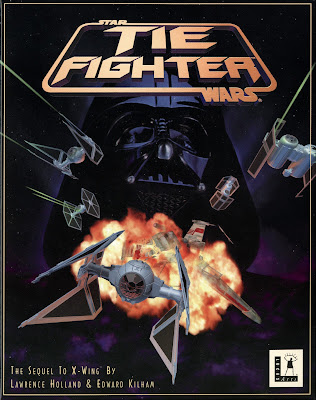 TIE Fighter was originally released in 1994 as the sequel to the previous year's X-Wing. X-Wing had been a big hit and a success, so a sequel was inevitable. However, the decision to have the player join the "bad guys" and fight against the heroes of the Rebel Alliance was somewhat unexpected. It was an idea that LucasArts took and ran with to great effect.

Technically, TIE Fighter is a big improvement over X-Wing. The flight model is a bit better, the wingman controls and AI are superior and the game's missions are more varied, with more in-mission events and unexpected events making things less predictable. There are far more ships and models (including proper space station models, thankfully) and you can now target sub-systems on big ships, allowing you to take out shield generators or turrets. Graphically the game looked a lot better on release, although for this re-release you are limited to the original graphics or the 1998 Collector's Edition, featuring the far more detailed and impressive X-Wing vs. TIE Fighter engine. The latter is certainly still reasonable enough to play today. 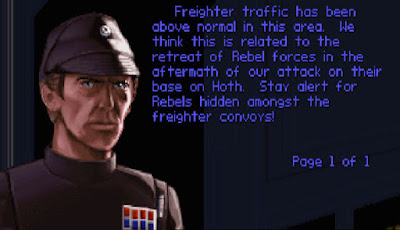 As you would hope, your CO (and most of the Imperials) has an English accent.

The game has a much more prominent and focused narrative. You play an Imperial fighter pilot who also has a secret agenda as an agent for Emperor. In some missions you have secret orders which go against your main mission but which will benefit the Emperor, standing you in his good graces and opening up further promotions. Part of the game revolves around an internal threat to the Empire, resulting in a mass defection of part of the Imperial Fleet to the Rebels, and you play a pivotal role in exposing the conspiracy. The narrative is pretty decent even today, featuring as it does bad people doing bad things to even worse people, making for a morally murky tale.

The game also does a great job of placing you as a cog in the Empire's military machine. X-Wing's wonky AI often required you to rush around doing everything yourself, but TIE Fighter's is much stronger and requires you to more often fulfil your mission objectives and stick to your role rather than being a stand-out hero. Without intending to, this allowed LucasArts to nail the difference between the Rebels and the Empire between the two games, and adds a lot to the atmosphere. TIE Fighter's early missions can also be tough, with you in a fragile, unshielded TIE fighter, interceptor or bomber going up against much tougher Rebel fighters.

If TIE Fighter has a problem, it's that it doesn't stick to its guns for very long. Within a few missions you are regularly flying the Assault Gunboat, a powerful ship with shields and heavy weapons that can easily go toe-to-toe with an X-wing (and with some judicious power management, can match A-wings). As the game continues you gain access to the TIE Advanced, which is more powerful than any ship in the Rebel arsenal. You then get the TIE Defender, which dials this up to eleven. At this point you may as well switch on a god mode cheat. Then, just to make sure it hasn't made you overpowered enough, you get access to a "Missile Boat" which has gatling gun missile launchers and allows you to lay waste to entire enemy squadrons before they can get anywhere near you. 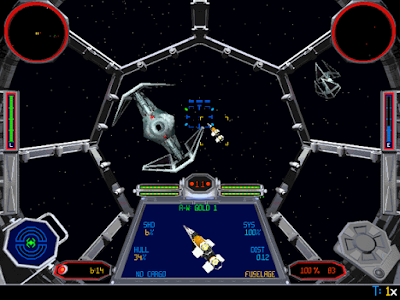 "Get out of the frigging way!"

This is all enormous fun and does address the problem of why, in the films, the Empire seems to be technologically inferior to the Rebels despite having much vaster resources, but it's also a bit silly and undermines the tension of early missions where a single mistake can mean a horrible, flaming death. It could also be argued that by making you a "bad guy" and then making you fight even worse people for most of the time rather than having to do anything really awful (like shooting down civilians), the game pulls its punches when it could have opened up into a more interesting study of morality in warfare.

But for a large chunk of its length, TIE Fighter (****) is superb. Combat is fast and furious, there is a much greater sense of tactics and strategy at work, the story (complete with cameos by the likes of Vader and Admiral Thrawn) is solid and the game does a great job of making you feel like a pawn of the Empire. It is a huge amount of fun, hasn't aged too badly at all and is now available from GoG.
Posted by Adam Whitehead at 12:58