Earth is under alien attack and it is up to the multinational defence organisation XCOM to defeat the invaders. But the aliens are now employing more advanced technology, including genetically-engineered creatures and mecha-suits. It falls to XCOM to adapt these weapons against the alien threat, even as it finds itself under attack by a fifth column of humans sympathetic to the alien cause. 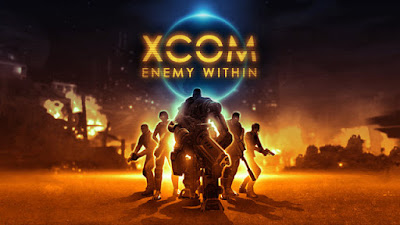 XCOM: Enemy Within is a major expansion to the original XCOM: Enemy Unknown. It isn't a sequel to the original game, but instead completely expands and reworks it. The meat of the game remains the same: you command XCOM, researching new technologies, launching satellites to scan for alien ships and launching interceptors to shoot them down, and then deploying combat troops to fight the invaders through a turn-based battle system. The difference is that as well as fighting the aliens, you are also battling EXALT, a group of humans who have sided with the aliens. In addition to this, you can now develop G-Mods (genetic enhancements to your troops) and MECs (massive robot battle-suits) to expand the fray. Rounding things off are more advanced options to make the game harder or easier, or expand its length dramatically.

At its core, this is still the same XCOM experience as the original and if you didn't like that, Enemy Within doesn't do anything that will win you over. This is for players who enjoyed the original game and want more of it. Sadly, there aren't any new weapons (although there now more varieties of grenade) or armour, or new alien types beyond the Seeker, a flying squid-thing which can cloak and strangle soldiers without warning. The Sectoids can also now use MECs themselves, which makes this fairly nonthreatening species dangerous again at an advanced stage of the game, but still fairly easy to defeat. 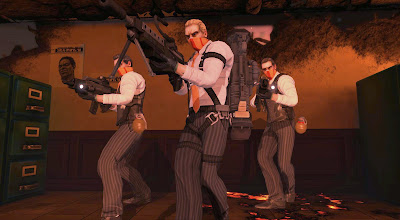 A big difference is the introduction of EXALT, a sort-of anti-XCOM who use similar weapons and tactics to your own troops. They seem a bit more threatening as well, more likely to use Overwatch and their troop types includes heavy missile and sniper classes that the aliens lack. EXALT are a worthy new addition to the game, but also one that can be disposed of without too much trouble: in the course of the new 30-hour campaign I played for this review, EXALT were around for maybe 8 hours of it before I defeated them for good.

The G-Mods and MECs are interesting new additions to the game, but are of limited utility. MECs look awesome, but their weapons are frequently less capable than the ones your own troops sport and their inability to use cover means they tend to draw the fire of almost every alien on the map on every turn. This makes them, weirdly, more useful as last-minute reinforcements to use only when everyone else is committed rather than the front-line shock troops they seem designed to be. G-Mods give your troops formidable bonuses, but these tend to be more useful only on the more punishing difficulty levels. 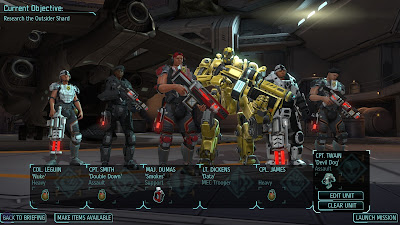 Enemy Within does bring a huge amount of variety to the base game. There are many more map types and variety of maps, and the various optional DLC has now all been folded into the game. This results in more narrative-based Council missions and more stuff to research and build. There is also a rather nasty new surprise in the form of a punishing base invasion mission, where the aliens will actually assault your base at an inconvenient moment and you have to fend them off in one of the more tense encounters in the game.

All of that said, the basic game is still the same and some may find these new additions do complicate what was a perfectly-balanced game. Others, and such is my view, will find that the additions inject new life to a classic title and elevate it just that little more. Enemy Within (*****) is available now on console in the UK (X-Box 360, PS3) and USA (X-Box 360, PS3), and on PC via Steam.
Posted by Adam Whitehead at 14:02

If you like Xcom:EW and want more of a challenge i highly recommend the Long War mod.