Tatiana Maslany finally gets an Emmy nod for ORPHAN BLACK

Showing that there is some justice in the world, Canadian actress Tatiana Maslany has finally gotten a Best Actress Emmy Nomination for her SF series, Orphan Black. 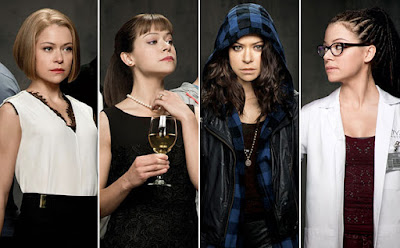 Maslany plays a group of clones on the show, portraying no less than five "regular" clone characters (Sarah Manning, Cosima Niehaus, Alison Hendrix, Rachel Duncan and Helena) and numerous smaller roles. Maslany's ability to completely inhabit each role to the point where you forget you're watching the same actress has been heavily praised by critics. Maslany's failure to be nominated for either of the previous seasons was seen as a misjudgement by the Academy of Television Arts and Sciences.

Maslany features some stiff competitions for the statue, with two-times winner Claire Danes getting another nod for Homeland, Viola Davis getting one for How to Get Away With a Murder, Taraji P. Henson being nominated for Empire, Elisabeth Moss picking up a nomination for Mad Men and Robin Wright getting some love for House of Cards. However, all of those actresses are only playing one role each, possibly giving Maslany a leading edge over the rest.

The stand-out show in the nomination stakes is Game of Thrones, which picked up 24 nominations including Best Drama and acting nominations for Peter Dinklage (who has already received one win for the first season), Lena Headey and Emilia Clarke. Thrones's showing may surprise critics who seem to have largely found it the weakest season to date (episodes like Hardhome notwithstanding), but may show that the Academy is listening to the zeitgeist.

The winners will be announced on 20 September.
Posted by Adam Whitehead at 16:48