KNIGHTS OF THE OLD REPUBLIC II gets a new update...ten years after release

Knights of the Old Republic II has, somewhat bizarrely, gotten a major Steam update today. Given that the game was originally released for Windows XP back in February 2005, this feels a bit late in the day. However, given the game's legendarily broken status on release, it is a bit of a special case. 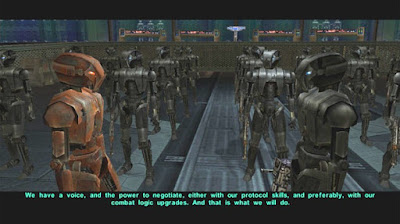 The original Knights of the Old Republic, created by BioWare and released in 2003 for the original X-Box, is one of the greatest CRPGs ever made and one of the greatest instalments of Star Wars - in any medium - ever released. It's a character-focused adventure which channels the pulp sci-fi feel of the original Star Wars movie and nails it absolutely right. It's downright brilliant and you should certainly play it if you haven't already. It's also a bit of a prototype for BioWare's later Mass Effect games, although for my money Knights of the Old Republic is comfortably superior. It's been recently updated to run on modern PCs from GoG and is well worth a look.

Knights of the Old Republic II, developed by the then-newly-formed Obsidian Entertainment, is every bit the Empire Strikes Back to the original game. It's darker, more brooding, more morally dubious and has a bit of a massive downer ending (although not a cliffhanger). It presents a far more cynical view of the Star Wars universe, one of shades of grey where the very simplistic notion of a "Light" and "Dark" side of the Force seems laughable. It's far more conceptually original and interesting than the original game. It should have been even better, but for LucasArts rushing the game out before it was ready, in a buggy and not-entirely-complete state.

A couple of post-release patches did help correct the more general and grievous technical problems the game was suffering from, but the missing content could not be fixed without a massive update which LucasArts were curiously unwilling to let Obsidian undertake.

Fortunately, Obsidian were canny enough to include some of the assets and code for the missing content on the actual game CD, allowing modders to extract them and start looking at ways of filling in the gaps themselves. And after a decade they've done what is by all accounts a bang-up job, via the Restored Content Mod. This completes a couple of incomplete storylines in the original game, puts some more closure in the ending (previously a rushed voiceover explained the fate of many of the characters) and, most critically, adds an entire new location to the game: a droid production facility which comes complete with attendant quests and characters and much focus on the beloved, homicidal assassin droid HK-47.

The new update officially incorporates the Restored Content Mod and also adds native controller support as well as blasting the resolution up to 5K for absolutely no good reason other than they can. It's great to see this older, underrated game being updated and brought to a new audience as a result.
Posted by Adam Whitehead at 22:38

Love it. I had never thought of KOTOR as a predecessor to Mass Effect, but now that you mention it it seems obvious. I completely agree, though, about it being "comfortably superior." Definitely one of the greatest games of all time.