Several major studios are engaged in an epic battle to win the film rights to Patrick Rothfuss's Kingkiller Chronicles series of epic fantasy novels. Rothfuss invited the studios to pitch to him at Comic-Con in an unusually public display of bidding ferocity. 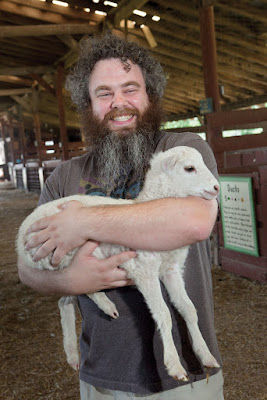 Rothfuss welcomed the opening bid for the film rights to his books, even if it was less than what he'd originally hoped.

The first two novels in the series, The Name of the Wind and The Wise Man's Fear, were released in 2007 and 2011 respectively. The concluding volume, The Doors of Stone, is expected in 2016. The imminent conclusion to the trilogy is probably what sparked interest from movie companies after several previous attempts to bring the project to the screen failed.

Warner Brothers, MGM and Lionsgate are believed to be leading the charge for the rights, with Fox and Universal also believed to be interested.
Posted by Adam Whitehead at 15:49

Email ThisBlogThis!Share to TwitterShare to FacebookShare to Pinterest
Labels: news, patrick rothfuss, the doors of stone, the kingkiller chronicle, the name of the wind, the wise man's fear

I'm not sure about this. The Name of the Wind was wonderful but The Wise Man's Fear was a step down from the debut. Maybe it's better for the studios to wait till The Doors of Stone comes out before deciding how much money to throw at Rothfuss.

Also, not every thing needs to be a movie / show.