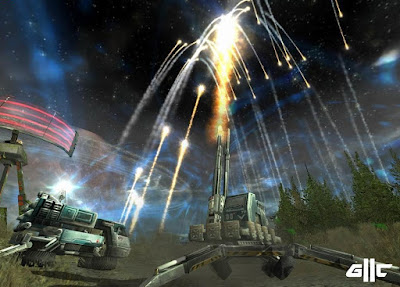 The Ground Control games have the best artillery units in any games, ever.

Ground Control was originally released in 2000 and was groundbreaking in its day. It had a full 3D map and camera, had no base-building or mid-mission reinforcing and - controversially - no mid-mission saving. It was a challenging game that rewarded tactically ingenious play, but was also furiously action-packed and has some visuals that were jaw-dropping at the time and remain pretty impressive today. Its minimalist UI also puts most modern strategy games to shame. It's absolutely brilliant, the equal of the likes of Homeworld and far superior to the likes of Dawn of War, and is highly recommended.

The sequel has better visuals and allows mid-mission saving and reinforcing, so is a bit less hardcore. It also has a better story and more unit variety with asymmetrical factions (the original game is more balanced between the two sides, although the mercenaries in the expansion bring a bit more variety to the table). Both are among the very best RTS games ever made, and are very highly recommended.
Posted by Adam Whitehead at 22:10