Harebrained Schemes have announced the development of a new BattleTech game, which they will be funding through Kickstarter this autumn. 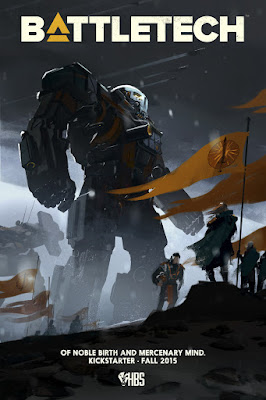 Harebrained founder Jordan Weisman is noted for creating the Shadowrun roleplaying game in 1989 and being behind the recent Shadowrun Returns franchise of Kickstarted RPGs (consisting of Dead Man's Switch, Dragonfall and the imminent Hong Kong, slated for release on 28 August). However, he is arguably even more famous for co-creating the BattleTech miniatures game in 1984 and its spin-off RPG line, MechWarrior. The MechWarrior RPG spawned a successful four-title videogame series in the 1990s and early 2000s, with MechWarrior 2 and 4 being particularly acclaimed.

The new BattleTech game takes things back to the beginning. This will be a strategy game featuring turn-based combat as well as RPG elements and the ability to create new mech designs. The game will also be open-ended and will draw inspiration from Mercenaries, the name of the expansions to both MechWarrior 2 and 4. This sub-series features player choice and a branching storyline with multiple endings, as opposed to the more linear storytelling of other games in the series.

BattleTech still has a large, dedicated fan following and following the impressive success of Shadowrun Returns, I suspect this will be one of those Kickstarters which is funded almost instantly.
Posted by Adam Whitehead at 21:32

Why do you need a Kcikstarter for a Battletech game? The name itself should be enough for some company to make a bet on it. Personally, I'm against the idea of people using Kickstarter as a promo tool. That's not what it's for.

The same was true for SHADOWRUN RETURNS. However, Weisman wasn't happy with how some of the SHADOWRUN and BATTLETECH video games made by other companires for big publishers turned out due to the compromises needed to keep the publishers happy.

Using Kickstarter for both SHADOWRUN and BATTLETECH is a way for Weisman and Harebrained to keep full creative control over the franchise.

So yes, it'd be possible to get both SHADOWRUN and BATTLETECH video games made by a big publisher. It would not be possible to get them made in the way Weisman wants, which is clearly single player-focused (both franchises have gotten a lot of multiplayer love in the last decade, but little in the way of SP games).

Weisman is in an enviable position, having created or co-created three well-known SFF franchises (EARTHDAWN being the third) with decades of name recognition behind them, and also being a pretty good pen-and-paper and CRPG designer with a proven track record, making him and his company a good fit for Kickstarter.