A Song of Facts and Figures: A Dance with Dragons 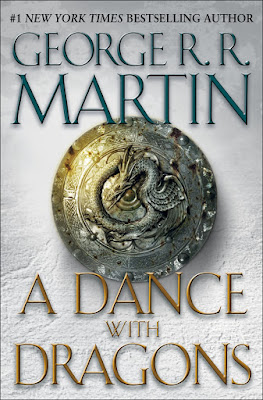 "The last one was a bitch. This one was three bitches and a bastard."

As his afterword to A Dance with Dragons indicates, George R.R. Martin did not hugely enjoy writing this novel. Originally envisaged "merely" as the flipside of A Feast for Crows and coming out a year or so later, the novel eventually grew much larger (half again the length of Crows) and came out a lot later (five years and nine months), to the annoyance of both the author and many readers.

The writing process for Dragons was torturous. Whilst Martin had 500 manuscript pages left over from A Feast for Crows (and indeed, in a different format, the "post-gap" version of Crows/Dragons), the process of structuring the sequel so it made sense and covered all the ground it needed to proved vastly more complex than first thought. The "promotion" of the mini-POV characters from Crows meant that Martin had a much larger cast of central characters to manage. His decision to bring the novel past the timeframe of Crows and revisit some of those characters later in the novel also introduced difficulties. But most damaging of all was the so-called "Meereenese Knot", a problem caused by different characters arriving in the city of Meereen and impacting on the story of Daenerys Tagaryen in different ways. Martin tilted at this problem numerous times across many months before finally resolving it through the introduction of Ser Barristan Selmy as a POV character. At another stage a conceptual rethink meant rewriting all of Jon Snow's chapters.

The book also had other issues stemming from where it fell in the storyline of the overall series. Originally, A Dance with Dragons was planned to be the middle volume of A Song of Ice and Fire when it was a trilogy and it would have focused heavily on Daenerys and her eventual invasion of the Seven Kingdoms. When the series was expanded to six volumes, Dragons became the fourth book, happening after the infamous "five year gap", and would have also covered political intrigue in Meereen. However, the introduction and expansion of numerous other storylines and characters meant that Dragons would cover less ground than originally envisaged: at the end of the novel, Daenerys's invasion of Westeros still seems a way off, with numerous plot stands in and around Slaver's Bay requiring resolution before she can move on.

A Dance with Dragons was also a book written in the full glare of public interest. Every word that Martin uttered for six years was analysed for hidden meanings or conspiracies. Every holiday or trip that Martin took away from the keyboard was carefully monitored. Each update provided by the author was used to second-guess what he was doing and how. Controversy surrounded the writing of the book to such a degree that when it was done and the author had commenced work on the sequel, The Winds of Winter, he went into lockdown and refused to even talk about its progress. A Dance with Dragons and the subsequent success of the book and TV series marked a notable change in the author's willingness to engage with his readers and provide hard updates on progress on the series. 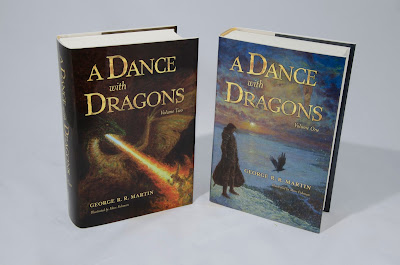 A Surge of Sales
A Song of Ice and Fire took a while to be a success. A Game of Thrones performed disappointingly in hardcover in the States, with sales not picking up until its paperback publication a year later. The UK edition, featuring cover quotes by the likes of Robert Jordan and trailed by a preview novella released several months earlier, apparently did better. The US paperback, which also included the cover quotes, saw a marked upturn in success. Strong word-of-mouth and positive reviews helped.

A Clash of Kings did well enough to hit the lower reaches of the New York Times bestseller list on release, but it was A Storm of Swords that really stood out for the first time. It hit #11 on the NYT list and sold well enough that it took two years for the paperback to come out in the States (a phenomenon repeated with the two subsequent books). The five-year wait for A Feast for Crows did not hurt the success of the series at all and the book hit #1 on the bestseller list on the day of release.

Between the release of Crows and Dragons it was announced (in 2007) that HBO was developing a TV series based on the books. Some TV critics picked up the books and began talking about them years before the TV series hit the screens. The result of this was a minor uptick in sales. Total sales for A Song of Ice and Fire prior to the TV series airing were never revealed, but guesstimates placed them in the region of approximately 5 million.

The success of Game of Thrones has changed that. An astonishing nine million copies of the books were sold in 2012 alone. Worldwide sales of the series have now passed 60 million. This puts Martin close to the sales of Robert Jordan's Wheel of Time series (estimated at 80-90 million sales) and Terry Pratchett's Discworld series (estimated at 85 million), both series with a much larger number of volumes. How much bigger the series can get remains to be seen, but with the HBO series likely to last at least another two years, it is likely that the books will continue to benefit.
Posted by Adam Whitehead at 16:21

Email ThisBlogThis!Share to TwitterShare to FacebookShare to Pinterest
Labels: a dance with dragons, a song of facts and figures, a song of ice and fire, bantam spectra, george r.r. martin, harpercollins voyager

Why were the jon chapters rewritten?

This was a great series man. Are you going to do one for Winds, as far as what we know about it so far/predictions about the release/final product?

Don't forget the "Not your bitch" comment by Gaiman.
This series has been going for more than 20 years now, I think that there is some merit in the argument that the series should be his only projects until it is finished.
However I also realise that he is not a robot, and if doing up some wildcards or editing short story compilations helps recharge his batteries then, that's what he's got to do.
The not writing while traveling is the main problem, if he is constantly attending conventions and jet setting around the world.
Ultimately there are hundreds of fantastic authors out there to read while we wait, I just wish that the books had kept ahead of the show.

"a conceptual rethink meant rewriting all of Jon Snow's chapters" oooh, could you link to something with a bit more detail on this? Intriguing.

It was a blog post in 2007, LJ is down right now so I can't access it. Basically in one post George said he needed to rewrite all of Jon's material and a couple of months later said it had been done. What needed rethinking and rewriting is not known.