A mysterious alien artifact - a gateway - has been constructed beyond Uranus's orbit. Its purpose is unknown. Representatives from Earth, Mars and the Belt are rushing to investigate, among them, reluctantly, Jim Holden and the crew of the Rocinante. The artifact holds the key to the future of the human race, an opportunity to spread mankind to the stars...but it is also a weapon that could incinerate the entire Solar system if it falls unto the wrong hands. 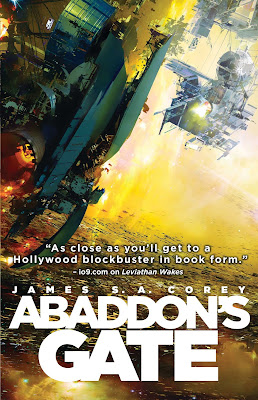 Abaddon's Gate is the third novel in The Expanse series by James S.A. Corey (aka Daniel Abraham and Ty Franck), which is expected to run to nine novels (and "Will soon be a major television series"). This book picks up after the events of Caliban's War, although unfortunately some of the more notable characters from that book are missing. Instead, we have a number of new POV characters joining the returning figures of Holden and the Rocinante crew.

The book initially opens with the different factions racing to the gate with their own agendas and goals in mind. There's a murderous character plotting vengeance on Holden in a (not very convincing) way of getting him involved in the plot. There's tensions on the Belter command ship between the psychotic captain and his more reasonable executive officer and security chief. There's a religious-but-non-fanatical leader who couples pious morality with hard-headed practicality. And so on. It's all reasonable enough, until the crew arrive at the gate and pass through it into a strange sub-pocket of space where physical rules can be rewritten and an ancient intelligence uses the form of Detective Miller to speak to Holden.

At this point things take a turn for the bizarre and it feels like The Expanse is about to break out into a fully-blown hard SF novel. The "slow zone" of the gateway space feels like a nod to Vernor Vinge, and the limitations of slower-than-light travel when the laws of physics keep changing is the sort of thing that would earn an Alastair Reynolds nod of approval. It's all nicely set up for The Expanse to move away from its MOR space opera roots and turn into something more than explosions and gunfights.

Except that doesn't happen. The novel soon falls back into its comfort zone of explosions and gunfights, with the major characters all forced into choosing sides between the psychotic captain of the Belter command ship and his other senior crew. This would have more resonance if we'd had the mad captain set up a bit better, but he isn't. It just feels like he's there and mad and antagonistic because, well, the book wouldn't have any conflict without him.

The action set-pieces are generally well-handled, there's some very nice zero-gee combat scenes and Abraham and Franck don't let up on the pace until the last page. There is no denying that there's fun to be had here. But it also feels a bit shallow, and it reinforces the feeling that The Expanse is SF with the training wheels left on. Abaddon's Gate feels like it should have been allowed to make a turn into crazy hard SF weirdness, but instead it's shoehorned back into being an action story. A very nicely-done action story, but there is military SF around that does this stuff a lot better.

As it stands, Abaddon's Gate (***½) ends up being just another readable, fast-paced and entertaining instalment of a readable, fast-paced and entertaining series. Which is fine, but there is definitely the prospect here, between the authors' excellent worldbuilding and solid prose skills, of elevating things onto another level. Hopefully later instalments will deliver on the promise of the series, which is so far tantalising but unfulfilled. Abaddon's Gate is available now in the UK and USA.
Posted by Adam Whitehead at 18:04

'A very nicely-done action story, but there is military SF around that does this stuff a lot better.'

Can you recommend some of those for people who enjoyed The Expanse?

For military SF, pretty much anything by Dan Abnett (particularly his GAUNT'S GHOSTS series and EISENHORN/RAVENOR trilogies) in the WH40K setting. Timothy Zahn, Michael Stackpole and Elizabeth Moon have some good stuff. Peter F. Hamilton (particularly in the NIGHT'S DAWN TRILOGY and COMMONWEALTH books) does some of the safe stuff as in THE EXPANSE, but with (slightly) harder SF concepts.

David Brin's UPLIFT SAGA also is certainly worth a read, and does widescreen, blockbuster SF with a few harder SF edges and some more bizarre concepts a bit better than THE EXPANSE. For something near-future (limited more to the Solar System) there's Kim Stanley Robinson, initially in THE MARS TRILOGY but then in 2312. I haven't read it yet, but Paul J. McAuley's QUIET WAR duology has also been strongly recommended for its near-future, limited-to-the-Solar-System setting. Its more recent sequels have done the EXPANSE thing of taking the story to other solar systems after the discovery of FTL technology.

Huh? From what I understand the Mars (trilogy on my reading pile but as yet unread) is very much not military SF, certainly not action- filled. Is 2312?

No, the MARS trilogy isn't military SF, but it is near-future and restricted to the Solar system, like THE EXPANSE. In atmosphere and tone it is completely different.

Agree with your recommendations (particularly Abnett and Hamilton) although I'd recommend sticking Elizabeth Moon's Vatta's War series (which has some of the best space combat I've read) rather than the Serrano series which seems overly obsessed with horses and horse-riding.