After a false alarm last week, here's the real deal: the cover art and blurb for Guy Gavriel Kay's thirteenth novel, Children of Earth and Sky. 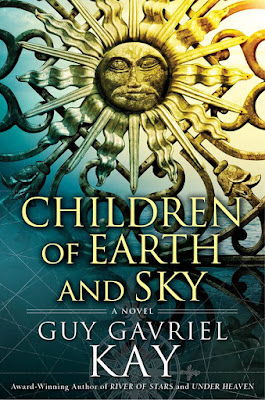 "The bestselling author of the groundbreaking novels UNDER HEAVEN and RIVER OF STARS, Guy Gavriel Kay is back with a new novel, CHILDREN OF EARTH AND SKY, set in a world inspired by the conflicts and dramas of Renaissance Europe. Against this tumultuous backdrop the lives of men and women unfold on the borderlands—where empires and faiths collide.

From the small coastal town of Senjan, notorious for its pirates, a young woman sets out to find vengeance for her lost family. That same spring, from the wealthy city-state of Seressa, famous for its canals and lagoon, come two very different people: a young artist traveling to the dangerous east to paint the grand khalif at his request—and possibly to do more—and a fiercely intelligent, angry woman, posing as a doctor’s wife, but sent by Seressa as a spy.

The trading ship that carries them is commanded by the accomplished younger son of a merchant family, ambivalent about the life he’s been born to live. And farther east a boy trains to become a soldier in the elite infantry of the khalif—to win glory in the war everyone knows is coming.

As these lives entwine, their fates—and those of many others—will hang in the balance, when the khalif sends out his massive army to take the great fortress that is the gateway to the western world…"


"We are delighted to announce the acquisition of the latest novel by the legendary Canadian fantasy author Guy Gavriel Kay for publication on May 12th 2016. The deal was negotiated by Jonny Geller of agents Curtis Brown UK.

In The Children of Earth and Sky Kay returns to the familiar territory established in several earlier works, a reimagining of the melting pot of the medieval Mediterranean. In his hands well-known places and events are transformed into the wonderful and strange through the lens of fantasy, and brought to life with brilliantly drawn characters and the most graceful of styles, which will seduce his many fans and new readers alike.

Acquiring Editor Oliver Johnson says: ‘To bring a celebrated, legendary author like Guy Gavriel Kay to our list is a truly wonderful moment; an editor’s dream is to publish a writer he has long admired, and this couldn’t be more true for me than with Guy. Though we have no specific genre list we are very proud of our work at Hodder with books that cross the divides of genre as Guy does with his brilliantly written, erudite and deliciously imagined works of historical fantasy. Our hallmark is great writing without bounds and we know we have acquired exactly that in Guy’s new work.’

Guy Gavriel Kay famously assisted Christopher Tolkien in the editing of The Silmarilion. His debut novels in the Fionavar Tapestry established him as one of the most exciting fantasy writers of the last half century. Several of his books (including Tigana, The Lions of Al-Rassan, Under Heaven) have been named as among the greatest fantasy masterpieces of the last twenty-five years. His work has been shortlisted for the Best Novel in the World Fantasy Awards several times and he won that award with Ysabel in 2008.  In 2014 he was appointed to the Order of Canada for his services to literature, the country’s highest civilian honour."

possibly also Sarantium again. My favorite of his novels.

Sounds like Song for Arbonne meets Lions of Al Rassan meets Sailing to Sarantium. That's not a bad thing. Honestly I found his last two China themed books not as interesting as his stuff in the middle Europe themed stuff so this one excites me.

I thought River of Stars to be one of the best "fantasy" books I've ever read, even though the 2 Sarantium books are my personal favorites of his.

Well...this is everything I hoped for and more.

Hopefully Hodder will be able to grow the market for Kay, he deserves a much wider readership. Sometimes a new publisher can give an author the marketing spend to allow a book to reach a wider audience.