1852. Denmark achieves an unlikely military and political victory against the forces of the German Confederation and consolidates its formal control of the duchies of Schleswig and Holstein. Twelve years later, Danish nationalism, reinforced by its victory and by the fervent ardour of the state council leader Bishop Monrad, results in a formal annexation of Schleswig and its large German population. The formerly disunited German states are now being unified by the Prussian statesmanship of the formidable Otto von Bismarck into an empire, the potential powerhouse of Europe. A considerably more powerful, larger and more skilled Prussian-Austrian army invades Denmark, changing the lives of millions of people forever. 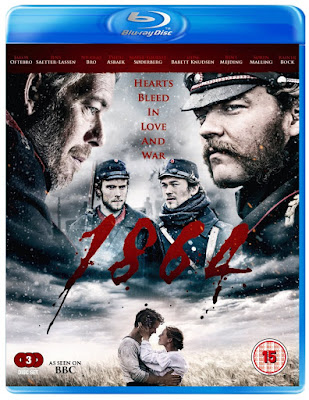 1864 is an eight-part TV mini-series, filmed in Denmark and is the most expensive television series ever made in the country. Many of the actors and crew are veterans of contemporary Danish noir series such as Borgen and The Killing, but 1864 stands in contrast to them as a sweeping, epic war story spanning generations and taking in the lives of soldiers, politicians and civilians during the Second Schleswig War of 1864. This war, obscure today outside of Denmark, marked a vital moment in the transformation of Germany from a loosely-allied collection of small states into a powerful empire, setting it on a course that would lead, six years later, to the Franco-Prussian War and eventually the First World War itself.

The so-called Schleswig-Holstein Question was a bewildering political/ethnic controversy of the time which reduced even ardent European politicians (well-versed in the most tedious minutiae of bizarre border disputes) to bemusement. Very wisely, 1864 avoids getting too entangled in this mess. Instead, it presents the story of the war in the impact it has on the population of a small Danish village. The local baron is incompetent and his son Didrich was a coward during the 1852 war, avoiding conflict and traumatised by the brushes with death he did experience. Returning home, Didrich wastes no time in taking his frustration and bullying tendencies out on the local population. Among those is a war veteran, Thøger Larsen. When he dies, his two sons, Peter and Laust, are forced to grow up and work hard to help their family survive.

Peter and Laust soon befriend Inge, the beautiful daughter of the baron's new estate manager. Their innocent childhood friendship is complicated when, as adults, Laust and Inge fall in love and Didrich's violent temper gets more out of control. When the war starts, the brothers join the army and find themselves under Didrich's command, whilst Inge discovers that she is pregnant with Laust's child. However, the brothers are soon separated as the Prussian and Austrian armies sweep north, smashing everything in their path. The Danish forces fall back on Dybbøl Hill, where the most decisive battle of the war will be fought against overwhelming odds. 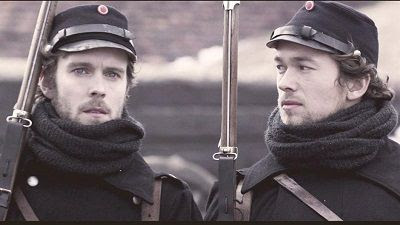 The structure of the series is interesting. First of all, there is a framing device set in the present day where unemployed delinquent Claudia gets a job caring for Severin, an old man who lives in the same manor house as Didrich and his father, now fallen into disrepair. An initially hostile relationship is overcome when Claudia finds Inge's journal and begins reading it to Severin. The series then uses the first three episodes to establish life in the Danish village and set up the key characters (Peter, Laust, Didrich, Inge and Sofia, the mute daughter of a travelling band of gypsies) as well as establishing the political situation through a series of subplots involving Monrad (the equivalent of a Prime Minister) and German historical figures such as General Moltke and Bismarck. The series does a good job of setting the scene for the war, establishing Denmark's nationalism and parallelling Monrad's own personal life (he loses confidence in his skills of oration and has to be coaxed back to competence by an actress) with that of Denmark's growing confidence and then disastrous overconfidence.

These opening three episodes are a bit weird, it has to be said. The first episode, which has child actors playing Laust, Peter and Inge, is a bit on the weak side and the actress playing the young Inge is painfully wooden. Monrad's crisis of confidence and regaining it by having an actress walk on him is also a bit strange. The idea here is to overcome the cliches of costume drama by showing the full range of human behaviour, including some eccentricities, and this is sometimes effective (Didrich is portrayed with more nuance than his one-note villain character summary may suggest). It's also sometimes just random, such as during a brief scene where a nobleman attempts copulation with a cow for no readily apparent reason. There's some brilliantly human moments in these opening episodes and they do set up the rest of the story superbly, but they're quite uneven. 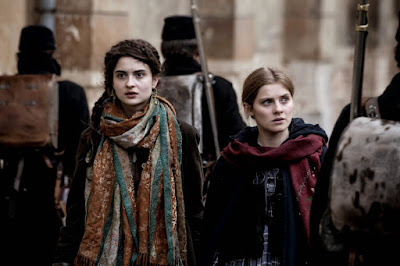 Things take a massive upturn in the fourth episode. When the war finally erupts and the brothers reach the front, the series unexpectedly turns into Band of Brothers: Denmark. A host of supporting characters appear as other soldiers in both Peter and Laust's platoons, all very well written and acted. There's some very deft characterisation, so that when characters with only a few minutes of screen-time are killed the audience cannot help but feel sympathy. There's also Wilhem Dinesen, Peter's commanding office and a one-man killing machine (and a real historical figure, the father of Karen Blixen, the author of Out of Africa) whose workmanlike, stoic heroism stands in contrast to the cowardice and blustering of Didrich. The series also touches base with some recurring characters in the Prussian ranks, such as the Marx-quoting soldier who is dismayed at having to wage war on fellow working men.

The fourth through seventh episodes are all-out war stories, focusing on planning, sieges and visceral scenes of bloody combat that match anything ever done by HBO. Some of the cinematography and scenery in these sequences are breathtaking, as are the visual effects (with some very effective mergings of CGI and practical stunts). However, the series always brings things down to the human level and humanises everyone involved, even the generals (many of whom are horrified when they witness what modern artillery and rifles can do on the battlefield and start looking for a peaceful way out). The final episode catches everyone up on what's happened, explains the relevance of the framing story and generally wraps things up well, while still leaving room for tragedy and regrets. 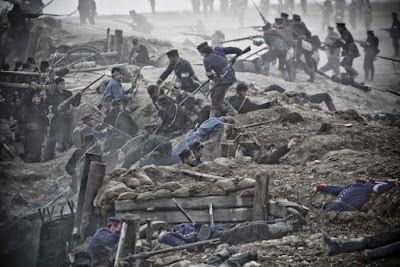 1864 is certainly an unconventional historical series, but it's also a gripping, memorable one. The direction is uniformly excellent and the writing is effective, although sometimes the symbolism can be heavy-handed. The series sometimes meshes together spiritual and symbolic scenes (such as the prescient Sergeant Johan Larsen drawing ice out of the heart of a dying comrade) with much more literal scenes of combat in a way that is really confusing. The framing story also veers a little into cliche, especially the depiction of Claudia as a teenage rebel because she's mildly nihilistic and has piercings. These bumps in the road are overcome thanks to uniformly brilliant acting and strong, measured pacing that knows when to throw in a horrific battle scene and when to focus on the character drama. A special word must be reserved for the music, which is particularly excellent.

As a work of history it's a bit more of a mixed bag. The writer-director has taken a view of history rather different to the traditional Danish one, trying to show the conflict as a pointless one brought about by overconfident politicians in the face of reason. The German characters are depicted fairly sympathetically throughout (apart from the hard-headed and ruthless Bismarck), as are the generals on both sides. Monrad, a more complicated historical character, is reduced to a religious fanatic and buffoon in the series. This is more of a shame as the opening episode suggests he will be a more important and complex protagonist, but as the emphasis switches to the battlefield and he appears less, he becomes more of a one-note figure. For a series that attempts to engage more in the real complexities of politics and war (it does so far better than almost any other recent war series of note), these failings are shame.

They're also fairly minor. 1864 (****½) is at times off-beat, weird and clumsy, and at others is funny, heart-warming and painfully human. But during its four-episode depiction of the actual war itself, it easily matches anything produced by bigger American or British studios and becomes unmissable. The series is available now in the UK (DVD, Blu-Ray) and USA (DVD, Blu-Ray).
Posted by Adam Whitehead at 16:19

Email ThisBlogThis!Share to TwitterShare to FacebookShare to Pinterest
Labels: 1864

In the US, when we think 1864, we're mostly focused on the US Civil War.
US price for this is over $40 but I'll try and pick it up if they sell it or rent it for streaming.