England, the early 19th Century. The Napoleonic Wars are raging and the country is in danger from its great enemy across the Channel. But another man, Mr. Gilbert Norrell, has another goal in mind: he desires the return of English magic and the creation of a new form of "respectable" magic, rooted in experimentation and study. Magic has been dead for over three centuries, and Norrell wishes to bring it back...in the form he chooses. 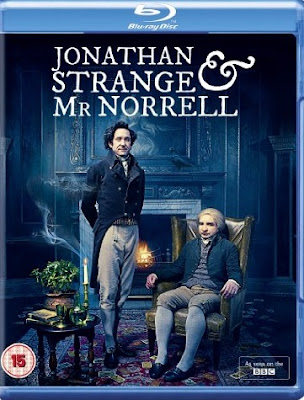 Another would-be magician is Jonathan Strange, a former layabout and sop who takes up magic when his father and fiancee both demands that he finds something to do. Strange and Norrell's paths cross and they agree to join forces for the good of England. But it isn't long before their opposing philosophies and viewpoints come into conflict.

Published in 2004, Susanna Clarke's Jonathan Strange and Mr. Norrell was an unusual debut. Almost a thousand pages of faux-Victorian prose, the book was littered with footnotes and festooned with footnotes explaining about the world and characters. Championed by fans like Neil Gaiman, the book became a massive, international publishing sensation and Hollywood soon came calling. However, adapting the book for the screen and retaining its storyline whilst also honouring its length and commercial sensibilities (the book is not well-suited to be turned into an action blockbuster trilogy) proved too challenging and the film rights were allowed to lapse.

Enter the BBC. Unburdened by commercial considerations and with growing confidence following a string of recent hit series, the BBC took on the challenge of adapting this weird, strange and brilliant book and did so by turning it into a weird, strange and brilliant series. They have form here, having taken Mervyn Peake's supposedly unfilmably weird novels Titus Alone and Gormenghast and turning them into a compelling (if perhaps a bit too ahead-of-its-time) mini-series in 1999. 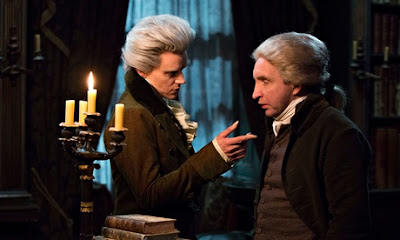 The TV series, of course, can't match the complexity and depth of the novel, even with seven hours to play with. Instead, it takes avoiding action by streamlining some of the action, removing much of the interminable second half of the novel (there's a lot less faffing around in Italy and Venice in the TV version), and refocusing the narrative on Strange and Norrell's relationship, on the situation with Lady Pole and the menacing activities of the Gentleman with the Thistledown Hair. Some of the losses from the novel are grievous - the loss in the particular of the witty footnotes is a shame - but in the event are survivable.

The TV show succeeds through the strength of its casting, particularly the genius casting of Eddie Marsan as Norell and Bertie Carvel as Strange. The two actors spark off each other brilliantly and Carvel embodies Strange perfectly as he moves from fop to gentleman to soldier to tragic hero. The rest of the cast is superb: newcomer Alice Englert is superb as Lady Pole and feels like a future Doctor Who companion in waiting. Charlotte Riley is likewise compelling as Arabella Strange, aided by a script that gives the female characters a bit more to do than they do in the novel. Another absolute stand-out is Enzo Cilenti as Childermass, whose world-weary cynicism conceals a genuine sense of humanity that gradually comes to the fore (culminating in him giving excellent last line of the series). Marc Warren also imbues the Gentleman with requisite menace, although arguably he is less whimsical and changeable than the character in the book. 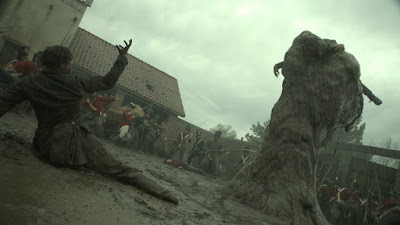 The series also has mind-boggling production values. It is, simply put, the best-looking drama series ever put out by the BBC. It has a confidence and swagger to its use of effects that outclasses the likes of Doctor Who, not to mention wit and imagination. A sequence involving a ghostly fleet, the famous scene where the statues in York Cathedral come to life and another scene where horses are summoned out of sand are all fantastically realised. The Battle of Waterloo is convincingly brutal and ugly, even on what was reportedly a fairly small budget. Another scene where Strange has to summon Italian soldiers back to life, only to find them speaking the language of Hell and having to find a way to get them back to speaking Italian, is both a stunning technical achievement and also a profoundly weird one. The book has a feeling of offbeat strangeness which I assumed the TV show would drop, but if anything it doubles down on it.

There are minor weaknesses: the key subplot revolving around the Gentleman's relationship with the manservant Stephen Black is not given a huge amount of development, and in particular lacks Black's interior characterisation. On TV, Stephen comes across as being far too acquiescent in the Gentleman's schemes rather than fighting against them more, and this makes some of his later character development feel a bit unconvincing. Norrell also gets a little lost in the mix as the emphasis moves to Strange for much of the middle and latter part of the series, although this is also the case in the book.

The BBC's version of Jonathan Strange and Mr. Norrell (****½) is superbly-cast, well-written and faithful to the book even as it has to streamline elements from it and improve other elements. It is an elegant, bizarre and compelling adaptation of the novel, and is well worth watching. It is available now in the UK (DVD, Blu-Ray) and USA (DVD, Blu-Ray).
Posted by Adam Whitehead at 17:22

Thought it was a great bit of telly but even not having read the book (it's in a pile and has been for about 8 years now!), I got the impression it was more of a whistle stop tour of the book than an adaptation of it. Years passed between some episodes but this wasn't put across brilliantly. A lot of things were suggested or hinted at which obviously happened in a lot more detail in the book.

Still, it shows the BBC can compete when it comes to spectacle. Which is nice.