Wertzone Classics: Parable of the Talents by Octavia E. Butler

California, 2032. Lauren Oya Olamina has founded a community, Acorn, in sheltered mountains near the coast. Acorn is a home, a haven and also the wellspring of an idea: Earthseed, a humanist philosophy that will, Lauren hopes, one day carry humanity to the stars. But the chaos-ravaged United States doesn't want humanist philosophies, it wants strong and determined action. When the battered population votes into power a populist demagogue who preaches fire and brimstone and puts the blames for the country's ills on outsiders, non-Christians, and anyone with strange ideas, Lauren finds her ideals and her resolve will be tested more than she thought possible. 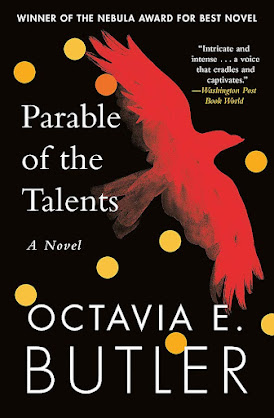 Parable of the Talents is the sequel to Octavia E. Butler's classic 1993 novel, Parable of the Sower. That novel was a more immediate apocalyptic novel, focusing on the societal collapse of the United States not from any of the usual suspects (nuclear war, a pandemic, climate catastrophe) but simple overload, assaults on its foundations of democracy and decency from almost too many directions to counter. Like the Roman Empire, the United States falls not from a single root cause but foundational cracks levered by the tyrannical and by opportunists into fissures. That book saw Lauren gathering a fellow band of survivors and setting out from the chaotic morass of Los Angeles (thematically sinking into chaos and literally starting to sink into the sea) to find a safe haven elsewhere. So far, so standard, though Butler's raw, poetic prose puts it much more at The Road end of the literary post-apocalyptic spectrum than the Walking Dead one.

Parable of the Talents picks up several years later with a more nuanced and interesting idea: riding out the post-post apocalypse. The world may feel like it's ended, but it's still here, and new societies will emerge out of the ruins of the old. In this novel the tension is ratcheted up between new movements wanting to take advantage of the opportunity to break with the dogma of the past, and those who believe that only be wholeheartedly and fanatically embracing tents of the past can they restore order...with themselves in charge, of course.

The novel has no interest in to being the first novel retrodden. This is a longer, more sophisticated book with a lot more going on. As well as Lauren's story, we have POV sections from decades further in the future written by her daughter, and some asides written by other members of the Earthseed movement. These reflect back on Lauren's life and achievements, and Butler does a good job of balancing this character reflection without spoiling the end of the book. The novel also varies its pace. The post-apocalyptic survival tale of the first book is here replaced by a book about surviving in civilisation, or what passes for it, when it is subverted by brutal fanatics. Sequences where the Earthseed community is overrun by the new President's more fanatical followers read like one of Stephen King's better horror novels. Later sequences, as Lauren's ideas take hold and civilisation fights back against the brutality of the new regime to put into place a new order, feel more like a Kim Stanley Robinson book.

The Earthseed philosophy and debates over its validity take up a fair bit of space in the book, more than in the first when the idea was still nascent and not fully-formed, and leads to intriguing and never-more-timely debates about whether humanity trying to become a spaceborne civilisation is a good idea when there is so much to do here on Earth. The counter-arguments - the technological benefits to civilisation from the space race and the importance on giving humanity, as a collective, a goal to aim towards lest it fall into decadence and regress - are interesting, if not hugely original. What is surprising is that the novel's structure means that it is mostly concerned with the immediate events surrounding the capture of Acorn. The larger, even cosmic themes of the novel unfold more through the looking-back framing device and through Lauren's long-term view of the future, as well as an epilogue that skips forwards through the decades.

Parable of the Sower was a post-apocalyptic masterpiece of raw emotion, intelligence and beautiful writing. Parable of the Talents (*****) might be even better, a story about human nature from its most brutal and repressive to its most hopeful and uplifting, centred on three-dimensional, flawed characters and eerily prophetic in its depiction of the early 21st Century being a less certain time then when it was written. The author considered writing a third book, Parable of the Trickster, to complete a trilogy but ultimately decided that the second book rounded off the story well enough, which is true. The novel is available now in the UK and USA.