Fantasy author Michelle West - a pen-name for Michelle Sagara - has been dropped by DAW following discussions between the publisher and distributor Penguin Random House. 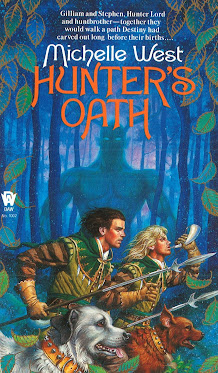 Although DAW remains independently-owned, the company has a deal with Penguin Random House which provides it with office space, distribution and printing facilities, meaning that PRH has some say in the company's operations. PRH now seems to be saying that it will not expend resources on authors who are only marginally profitable.
Sagara's fantasy novels published as Michelle West seem to fall into this category. Under the West pseudonym, Sagara has published sixteen books in the Essalieyan universe, a series-of-series projected to contain at least four series in total. The published series are The Sacred Hunt (two books, 1995-96), The Sun Sword (six books, 1997-2004) and The House War (eight books, 2008-19). The sequence was set to conclude with End of Days, a four-book series.
Sagara had written 200,000 words for the first book in this series, Hunter's Redoubt, but editorial changes meant having to rewrite around half the material. During discussions with DAW, it appeared they could no longer publish the books as previously discussed and they would only be able to proceed if the novels were reduced in size. Sagara did not want to do this, finding the process of splitting the books into smaller volumes to be impractical.
Sagara's publishing career has been moderately successful, with early reasonable success giving way to lower sales in the 2000s and 2010s. Sagara notes herself that her books might be too long and have too many volumes (the middle two sequences alone span fourteen novels), which some readers may have found off-putting. The chronology of the novels is also potentially confusing, with the original Sacred Hunt duology actually taking place in the middle of the timeline, and those books not being as well-received as later volumes. In addition, her international profile is low (she has not had a UK or Commonwealth publisher) and based on her Goodreads profile, it appears that she has not succeeded in picking up many new fans in recent years, instead relying on her older, more established fanbase from the mid-1990s.
Sagara has now set up a Patreon and plans to bring the series to a conclusion through self-publishing. It sounds like her other long-running series, Elantra, will continue via Mira Books.
Posted by Adam Whitehead at 17:34

Never heard of this author or the book series, but it must be really disappointing for the fans that the conclusion wont be published by the publisher.

You can pretty much assume Martin will be pressured to keep the page count down on Dream of Spring, just in the interests of Martin actually getting to publish it in his lifetime.