Netflix has unveiled the core cast of its live-action reboot of the animated series Avatar: The Last Airbender. 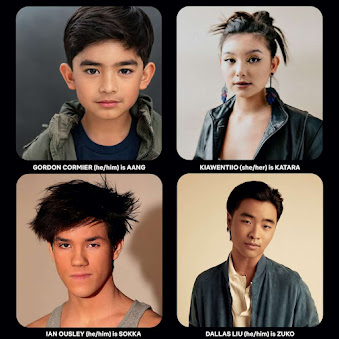 The series stars Gordon Cormier (Lost in Space, The Stand) as Aang, Kiawentio (Rutherford Falls) as Katara, Ian Ousley (13 Reasons Why) as Sokka and Dallas Liu (Bones, Shang-Chi and the Legend of the Five Rings) as Zuko.

The show will be written and showrun by Albert Kim (Sleepy Hollow). Michael Goi, Roseanne Liang and Jabbar Raisani will be the directors for the first series.

Netflix have confirmed that they plan to make a "faithful and authentic" adaptation of the original Nickelodeon series, which has a large international fanbase and rocked to the top of Netflix's charts when it started airing the animated series last year. The project has been in development for years, with the original animated creators Bryan Konietzko and Michael Dante DiMartino in charge. However, they quit in 2020, citing differences of opinion with Netflix, whose representatives they claimed were interfering with development. They have since returned to Nickelodeon to launch Avatar Studios and are developing animated projects set in the world of the original series, starting with a new animated feature film.

This news, and leaked casting sides suggesting wide-ranging changes to the plot and characterisation, had raised concerns among fans. However, the casting and Netflix's character descriptions are relatively faithful to the original show (the leaked casting sides had swapped Katara and Sokka's ages, whilst the actual press release restores them). Showrunner Albert Kim has promised a series that will use its greater running time to expand character and story arcs whilst keeping the original story intact.

More casting announcements are expected, particularly for the fan-favourite character of Uncle Iroh.

I am just not sure this is a good idea.