J. Michael Straczynski volunteers to take over as DOCTOR WHO showrunner from Chris Chibnall

Noted American SF screenwriter, producer and showrunner J. Michael Straczynski has thrown his name into the ring to take over Doctor Who once incumbent Chris Chibnall departs at the end of 2022. 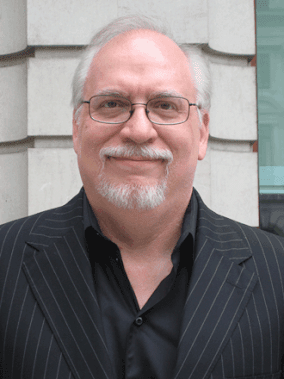 Straczynski is a noted Doctor Who fan of many decades' standing, having watched the show when it aired on PBS in the United States in the 1970s. Straczynski, a self-confessed Anglophile, was also a massive fan of The Prisoner and Blake's 7, and has frequently cited all three as influences on his classic space opera series Babylon 5.
Straczynski has also cast Doctor Who alumni on his showers: Guy Siner (Genesis of the Daleks) appeared as a Minbari on Babylon 5 and Christopher Neame (Shada) was a "Knight" on the same show, whilst Sylvester McCoy (the Seventh Doctor) and Freema Agyeman (Martha Jones) appeared on his later Netflix series Sense8.
Doctor Who has traditionally always been headed up by a British showrunner, although its original creator Sydney Newman was Canadian and the show's second showrunner (though the term did not exist back then), John Wiles, was South African. Even the producer in charge of the 1996 American Doctor Who TV movie was British, Philip Segal.
Furthermore, even if the BBC were willing to look beyond Britain for a new showrunner, they seem to have a specific antipathy towards American writers. Acclaimed SF and horror novelist Joe Hill pitched three scripts to Doctor Who with the help of Neil Gaiman and received a shocking reply from the BBC saying, "We have never let an American write Doctor Who, and if we were going to, we wouldn't start with you."
So the chances of Straczynski being considered for the role appear to be slim, despite the fact he's a very popular choice among both fans and more general viewers and would tick the boxes of being a strong SF writer of great experience, a very experienced showrunner and also a writer noted for tackling wide-ranging and diverse subject matter. It seems more likely that the BBC will be looking for a British (or, at the very least, non-American) producer instead.
Posted by Adam Whitehead at 18:39

Oh for pete's sake, it's Doctor Who not William F'n Shakespeare. Yes it can be very entertaining, but it will never qualify as high art. The Brits really have to get over themselves.

Wow... what a brutal rejection. And kind of narrow mindset from BBC. Straczynski would be a good fit. Probably would at least keep the plot more focused than some of the last seasons had.

They turned down Joe Hill? Who has Locke and Key and his resume, yet they let Chris Chibnall be showrunner! Explains a lot in recent years. I'm not sure based on the state of British Television I'd be turning down American writers.

Doctor Who is dead, don’t waste your reputation on trying to save it. Do a Blake’s 7 reboot instead.