Amazon unveil images from the WHEEL OF TIME TV series

Via Entertainment Weekly, Amazon have revealed some new publicity images from their upcoming TV show based on Robert Jordan's Wheel of Time novels. 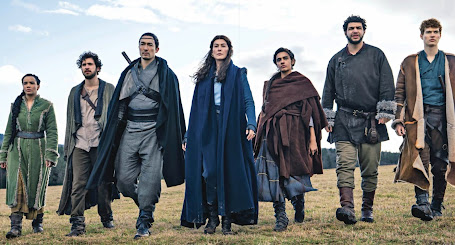 The regular cast of the first season of The Wheel of Time, from left to right: Nynaeve al'Meara (Zoe Robins), Mat Cauthon (Barney Harris), al'Lan Mandragoran (Daniel Henney), Moiraine Damodred (Rosamund Pike), Egwene al'Vere (Madeleine Madden), Perrin Aybara (Marcus Rutherford) and Rand al'Thor (Josha Stradowski).
The latest issue of Entertainment Weekly has more pictures, including images of Moiraine and Lan in the forbidding city of Shadar Logoth and the false Dragon Logain as a prisoner of Aes Sedai sisters led by Alanna and Kerene. In the accompanying interview Rafe Judkins notes the scale of the production, such as the decision to spend immense amounts of time and money on the ruined city of Shadar Logoth despite it having only limited screen time.
Amazon's Wheel of Time TV series is expected to debut in November, with a final date yet to be revealed. A trailer is expected in the next few weeks.
Posted by Adam Whitehead at 17:17

Looking forward to the series. The thing that stands out to me the most about the photo is how tall Moiraine is. Compared to the book she looks so out of scale.